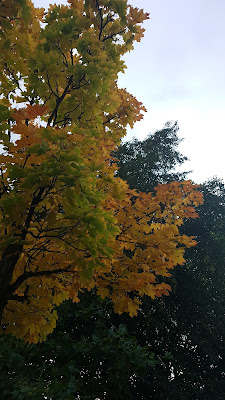 There's something of autumn about Michael Head's last album, Adios Senor Pussycat, recorded by the man himself and his Red Elastic Band- that scouse mysticism and the playing (acoustic guitars, trumpet, piano, slightly psychedelic folk). It's three years now since it came out and it's one of the few more trad guitar albums from recent years that I can still go back to and find fresh. The opening song is called Picasso and like many great album openers starts with found sounds, street noises, seagulls and muffled voices, before the band kick in with a folky rhythm, a saw and little flourishes of guitar. Mick's voice and lyrics have that quality of hard won wisdom, 'It's not like it in the movies/ there may be police involved', life experience coupled with poetic turns of phrase.

I lived in Liverpool for three years as a student, 1988- 1991, and although this song was three decades away then and Mick had a whole stretch of legendary albums and bad luck to go through in the time between, when I hear Picasso it always makes me think of Sefton Park in the autumn, leaves a riot of rust and red, waiting for the bus on Smithdown Road, record and clothes shopping down Bold Street. Weird how a song can do that, play time travel tricks on the mind.

I agree totally. I'm so glad we had Shack; they are still, for some, a forgotten band, but for those of us who experienced them at close quarters they're a national treasure.

Liverpool was my second choice uni, back in the days of UCCA forms and the like. Sometimes wonder how different my life would have been if I'd gone there, given that my eventual choice led me, sometimes indirectly but sometimes very directly, to certain jobs, certain people, my partner, my child...

Katy Perry also has a song called It's Not Like The Movies. Saw the title of this post and thought, for one jarring instant, that this blog had suffered an abrupt change of direction.

Shack were great. I'd been a Paleys fan and got the first Shack album when it came out, although it's over clean drum machiney sound was a bit of a surprise at the time. But boy did they get better.

Martin- that something I think about sometimes, the choices you make that end up determining your life and how different things would have been if you'd done something else.

Lovely words there from both you and Michael. I was trying to think what the vocal line in particular reminds me of and then it struck me, it's very similar to 'If I Were A Carpenter' (and that's a good thing!)

Shameful, inconceivable eevn, but my ears weren't opened to Michael Head until The Magical World Of The Strands. But that's one of the things i love about friends' musical tastes, music blogs and the best of the internet, it facilitates a constant urge for education and exposure to new (old) music. Better late than never, as far as Michael Head is concerned. Another illuminating post, Adam, thank you.

Certainly one of the best albums of the last decade, Adiós, Señor Pussycat is one of those albums I love to listen two from start to finish. HIs untouchable ability at writing a song is only made that much more powerful by his performance. 4&4 Still Make 8 is the song that was an immediate Mick Head classic for me.

When the Artorius Revisited Mini-LP (it was way more than just and EP) came out a few years before the album, I was struck by the beauty of the track Cadiz. The song is gentle, filled with the sort of hope and promise that a man who has been down deserves to attain. I became just a little obsessed with city that is the song's namesake. So much so that I convinced two of my best friends in London that we should take a long weekend in that city at the tip of the Spanish coast that sits on the Atlantic Ocean. We planned for when - the Fall of 2017, end of September-beginning of October to be exact. By then, Adíos, Señor Pussycat was out and I was further obsessed. SA, I can tell you that that feeling of Autumn's changing colors and the creeping in of shorter days works in any city. It became our soundtrack to the trip, sipping Manzanilla Sherry over endless plates of Tapas, walking on the beach, walking the backstreets of the old city at night. I read somewhere that Cadiz was both a dangerous and rejuvenating city for Mick Head, and I can see how it could be both.