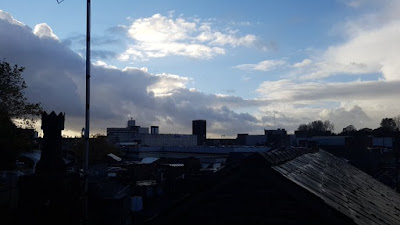 This previously unreleased Andrew Weatherall remix dates from 2018 when London band Django Django put out their third album, Marble Skies. I have no idea why it has been lying in the vaults for so long but now eight months after Mr Weatherall left us it's seeing the light of day which is a good thing. A nine minute piano led thumper, with some huge sounding tom toms and lots of extraneous of noise surrounding the melodies. The kick drum pounds away and a snippet of vocal , a whoop or a syllable, is looped and repeated. It's all a bit of a long, euphoric blur. Andrew's remix of Marble Skies is only out digitally as far as I can see- you can buy it for 99p here.

At the weekend while painting, the Weatherall remix of Speed of The Dark came on the ipod and I was pondering the fact that there would be no more of these magic remixes and wondered how many were sitting on hard drives or tapes that would never now see the light of day.

Fucking sad so it is

I had a similar thought when listening to the new ACR album recently- he would surely have done a remix for them based on his links with the band in recent years.

There are a couple of other unreleased remixes- a Fireflies one which should come out at some point, the Piano Magic one, one for Beck that never saw the light of day. And probably hours of music on hard drives in Facility 4. There are TLS live songs from the live band tour and versions of Sabres era songs. Fingers crossed!

two fireflies remixes I think... also Ashley Casselle remix is still meant to come out but tragically yep not much left now. Hopefully some A&Rs will be rooting back through their archives and finding the rejected versions and considering putting them out

To be fair, when the news hit in February, I was pretty distraught that I would never be looking forward to a Weatherall record again So the fact that this has surfaced, plus the Glok Remix and the Woodleigh Research releases continuing,gives me a little hope that there's quite a few bits stored away that will see the light of day

I feel fortunate in that I could never keep up with Lord Sabre's prodigious output, so there's still plenty of officially released gems that I'm catching up with. This is characteristically excellent, though.