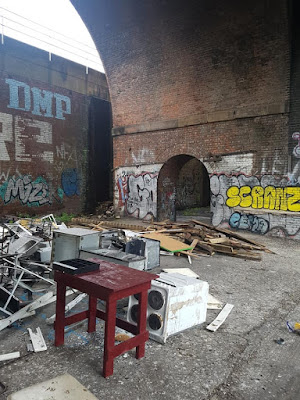 There's been a re- issue campaign going on all year of African Head Charge's albums, a box set called Drumming Is A Language 1990- 2011 and an album of outtakes, mixes and dubs titled Churchical Chant Of The Iyabinghi, ten songs/ dubs circa 1990 sequenced as a psychedelic dub trip. Adrian Sherwood and Bonjo Iyabinghi Noah created a unique sound as African Head Charge, percussion and African drums, Sherwood's bass heavy, dubbed out sounds and vocals sampled from religious cultures around the globe. Churchical Chant really needs to be heard as a whole- you can buy it at Bandcamp- but here's a taster, ideal sounds for a Sunday in October. Settle down, ignore the news for a while and soak it up.