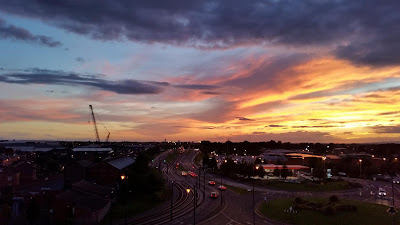 Tonight at one minute past midnight Greater Manchester goes into Tier 3, the highest rank of the government's new Coronavirus restriction system- if this government can really be said to anything as planned or thought out as a system. The government have had months to prepare for an autumn wave. Literally everyone said it was coming. They've had months to set up a functioning testing service, to create a Track and Trace system, to come up with a coherent plan for dealing with the rapidly rising numbers of new cases and the influx of hospital admissions. Instead, they paid people to go to the pub for food in August while turning the blame for non- compliance with the rules onto the people.

What they have signally failed to acknowledge is that this government lost all it's moral authority to govern, every last ounce of it, when they failed to sack Dominic Cummings in May. At that exact moment and that charade in the garden of 10 Downing Street where their senior advisor- an unelected member of the government remember- refused to admit any wrong doing, Johnson's government could no longer tell anyone what to do. They had broken the rules themselves and didn't care. They were laughing at us. They were contemptuous of us.

Since then some people have kept to whatever rules are in force wherever they live, some people have largely followed the rules using their own judgement and common sense about where they can bend them and some people have taken the view that if the government don't play by the rules then why should they? Some of us have barely crept out of lockdown at all- we are still effectively shielding an extremely vulnerable person. Watching other people flout the rules hasn't been easy. The feeling that existed back in April, that we were all in this together, which existed genuinely for a while, has been blown apart. As numbers have crept up again since September Johnson has dithered and delayed. They locked down too late in March, they opened up too early in the summer. They introduced local restrictions that were difficult to understand and changed seemingly on a whim. They left Leicester in a local lockdown that never seemed to end. They announced that one place would go into further restrictions almost instantly while another would be able to wait until after the weekend. Now, with Merseyside, Lancashire and Greater Manchester all in Tier 3, gyms in Merseyside must close while in Lancashire they can stay open. Pubs serving 'substantial meals' can stay open but pubs that don't must close- does Covid 19 not infect people while using a knife and fork? They bullied the civic leaders of Liverpool into accepting Tier 3 and then found that the elected mayor of Greater Manchester, Andy Burnham, the leaders of the council and a cross party group of MPs wouldn't roll over. Funnily enough the pair of Conservative MPs refusing to accept new restrictions without a fight (including the Chair of the 1922 Committee, Sir Graham Brady) weren't attacked with the same venom Burnham has been. The politicians fighting the government's attempts to impose Tier 3 on Greater Manchester weren't even necessarily arguing that the restrictions weren't called for, they just wanted the evidence that the ones being proposed would be effective (which wasn't forthcoming because this government is shit at details and just relies on the selective use of data to try to prove points). What Andy Burnham and the rest also wanted was financial support for the thousands of locals who would be affected by the loss of their jobs and the withdrawal of income. Johnson's middle man, Robert Jenrick (himself guilty of breaking lockdown restrictions in April), found himself up against a Zoom wall of anger and disgust, from Tories as well as Labour, and when it came to finding another £5 million, told his boss Johnson that the deal was off. Andy Burnham stood in front of GMex- the site of the Peterloo Massacre in 1819- and quite rightly told the cameras that this government promised to level up the north and here they were further levelling down.

It seems pointless to close some businesses while leaving many others open. It seems pointless to close some pubs while leaving many still serving. Schools, colleges and universities are one of the main breeding grounds of the infection currently but since various opponents have called for a short 'circuit break', Johnson's government refuse to consider this- not for scientific reasons but because it's politically unacceptable for them to do what the opposition have asked for. A circuit break policy is now taking effect in Wales and it wouldn't be a surprise to see Scotland follow suit, but once again Johnson dithers until it's too late. Their own scientific advisors recommended it several weeks ago. Johnson rejected it but still claims to be 'following the science'. Tiers, as someone pointed out recently, are not enough.

A couple of days ago on social media I said this about Andy Burnham...

It's fair to say that this man becoming a genuine hero in Manchester and the north west wasn't predictable. His reasons for becoming mayor didn't always seem clear, his run for the Labour leadership in 2015 was a disaster and I don't think everyone here has always trusted him, but he's shown true leadership and grit the last few days, standing up to the useless bunch of chancers and incompetents in the government and standing up for us. More power to him.

And I stand by all of that, cometh the hour, cometh the man etc. It has been a truly absurd year, a nightmare in many ways, full of personal and public disasters and political horrors. It's genuinely encouraging to see the odd green shoot while also keeping that anger burning. 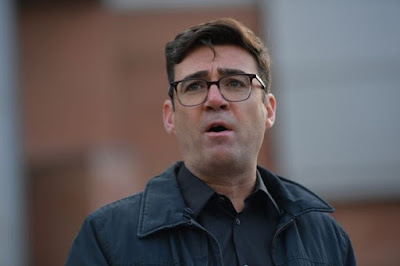 Very well put together post Adam, I can feel your anger and despondency from here, in fact I share it. They really do think that the majority of us are fools and are willing to suck up what ever shit that they throw our way. I think things are on the turn though. Wouldn't it be ironic if Greater Manchester managed to get away from Westminster before Scotland. I would be raging but fair play to Andy Burnham he has shown himself to be capable of standing up to Johnson and not just playing politics but for standing up for the people he represents, dealing in facts that he understands in stark contrast to the entitled arrogant grifters he is trying to deal with.

Don't mention Jenrick, my contempt for that crooked, corrupt man is nearly on a par with how I feel about Gove, which is quite impressive as up until a few months ago her didn't even register with me.

Never heard that Weller remix before, good that.

Spot on Adam
If Cummings, Stanley Johnson and Margaret Ferrier can do what they like you can understand why some people say why bother
The Government(the GB one) have lost what little trust they had from the people.
We are heading to a dark place

btw, I meant to say you just know that Burnham has a full collection of Joy Division/New Order records at home

You are, of course, spot on. Yet the right-wing media (which is most of it) STILL refuses to expose Johnson and his cronies for the frauds that they very clearly are. We are all mugs to them as well.

At least in Wales we have a government that has taken decisive action. The First Minister made it very very clear what was happening, why it was happening and for how long. No ifs, no buts, and absolutly no errs and no ums, unlike Boris' incoherant mumblings everytime he opens his mouth!

We wait to see if it's actually going to work or not, but at least there's no north/south divide in Wales, no ambiguous some-can-do-this-and-some-cannot rules. But then, there aren't any Tories involved...

Burnham is such an enigma. I thought he's be a decent Labour leader, but he went - I can't find another word for it - weird in his campaign. He's finally found his feet and more power to him.

And Burnham is famously a huge fan of The Wedding Present...!

Excellent post, by the way. What a shower they are, this lot "in charge". You absolutely nailed it in saying they are contemptuous of us. How did our nation, our electorate, let it come to this? Mind-boggling and depressing in equal measure.

Very well written, I'm generally at a loss for words. This continual feeling of ange and bewilderment at what is happening.

I've seen trending on Twitter 'Republic of Manchester' 'Republic of Wales' I thought back at the time with the Scotland independence referendum that it was right to stay, because we are better together. But now...
Everything is breaking up because of one man (probably Cummings but Johnson still complicit) and after January 1st this breakup is going to hasten.

Great post. Burnham must be a future Labour leader on the strength of the last couple of weeks alone. I get the feeling he knows how to choose his battles now.
I really can't express how much loathing I feel for the shower of incompetent bastards in charge of the country. We'll just have to hope people remember at the next election and never, ever, trust their kind again.
Superb tracks btw...

I know I'm preaching to the converted on here largely but it's encouraging to read all your comments. Thanks all.

Spot on Adam, Andy Burnham has come out of this week with a lot of credit, but the worrying signs are that this Government clearly don't care about the North of England and are prepared to play fast and loose with people's lives. The way that Johnson and his cronies tried to impose restrictions on Manchester on the cheap and made it all about political point scoring and quibbling over 5m and then 48 hours later produce another endless pot of money sums up these moronic scum

Not a lot I can add that hasn't already been said far better in your post and the previous comments, other than to send best wishes to you and your family. Lots of people in the South who do care and didn't vote for this government. Democracy or hypocrisy? Too little of the former, too much of the latter.