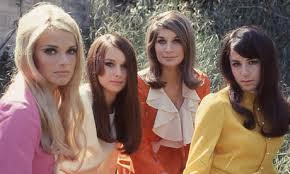 These four young ladies were Honey Ltd, discovered by Lee Hazlewood in Los Angeles in the 60s and signed to his Lee Hazlewood Industries label. Lee named the band, put them in the studio, recorded them and launched their honey-clad vocals into the cut throat world of 1960s pop. After which, a quick fade into nothing. Our Mums probably looked something like this forty odd years ago.

Honey Ltd have recently been re-issued in their own right and as part of a mammoth LHI boxed set (everything Lee Hazlewood's record label put out in one box, from a time when money wasn't an issue). Lee moved to Sweden in the 70s (by which time money had become an issue) and spent much of the rest of his life there.

Tomorrow Your Heart
Posted by Swiss Adam at 08:00

Lovely. This really was the golden age of Californian pop. I remember reading a piece about them in The Observer Review, I thought back in the summer, and resolving to investigate, but tempus fugit and it turns out it was way back in February, so thanks for the reminder.

Correction! There were two pieces about them and the one I remember was indeed in the summer - an interview with them all; well worth a read.

I knew I'd read something about them recently.