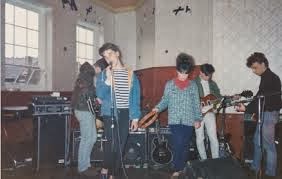 The night before last Mrs Swiss was out. I was sitting leafing through Sam Knee's A Scene In Between book, a visual history of the 80s indie scene- bowl cuts, anoraks, cord trousers, Chelsea boots, duffle coats, striped t-shirts, the back rooms of dirty pubs and photo shoots in local parks. Gideon Coe was on BBC radio 6 playing songs with a girl's name in the title, and a surprisingly good selection the first hour was too. He played The Sea Urchins' Pristine Christine single at almost the exact moment I saw the pictures of them in the Sam Knee book and I don't ignore coincidences like that when trying to come up with posts for this blog on a daily basis. Pristine Christine has out of tune vocals, jangly guitars, and rat-a-tat drumming keeping time but doing not much else. It is archetypal 80s indie-pop. It sounded wonderful on the digital radio and is quite superb.