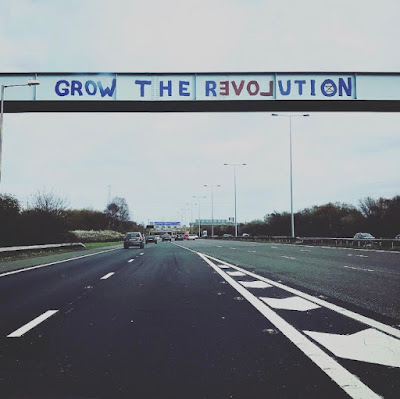 This graffiti appeared on a footbridge that crosses the M61 a little while ago. The photograph was taken by someone I follow on Twitter, Paul Wright. I drive underneath it every day on the way to and from work but haven't been able to photograph it due to my hands being needed to drive and it being dangerous and all that, so I'm glad Paul got a shot of it (and I hope he doesn't mind me using it here). On the other side of the bridge, heading away from Manchester, there is another piece of graffiti by the same writer that reads 'burn fuel don't care we all breathe the same air', something I think about often as my car goes underneath it.

Wilmslow's favourite sons Doves are back and are playing some festivals this summer. They're playing Heaton Park in June but going to see them there would mean shelling out for a Noel Gallagher gig, something which I'm reluctant to do. After that they're in Glasgow and at Bearded Theory Festival, Tramlines in Sheffield, Kendal Calling and Somerset House in London (all during term time). A smaller gig somewhere in Manchester would be nice (I'd settle for Castlefield Bowl if need be).

Doves have been well served by remixes in the past.  The original version of Black And White Town from 2005 is an uptempo northern soul inspired stomper. David Holmes slows it right down, puts the descending bassline at the centre with some organ, with the vocals in the distance occasionally, echoing in.

Their last album was Kingdom Of Rust in 2009 with various remixes surrounding it across various single releases including this monster from Andrew Weatherall, a bass heavy version, kicking off with shouts and reverb, and then a crunchy drumbeat, a remix that crackles with electricity and ideas. This remix was a sign that Weatherall was finding his groove again, the start of a purple patch that has lasted a decade now.

There was also this eight minute gem, a Diskomiks of the title track by Prins Thomas, a 12" promo of which I found in a local charity shop yesterday for £1.99 and which sounded really good in the early April sunshine.

A monster from Weatherall ?!!

(I've run out of witty retorts, have to think of something)