Shoes With No Socks In Cold Weather 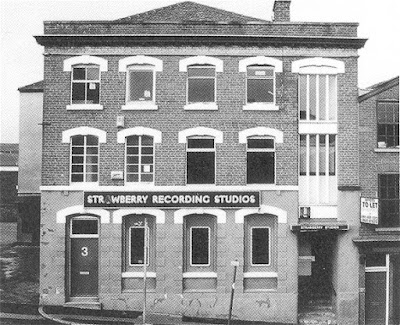 In their fortieth year A Certain Ratio have gone all out and are set to release an anniversary box set in May, twenty eight tracks making up the singles and B-sides that weren't included on any of their albums and sixteen previously unreleased songs. You can read about it here. Ahead of this they have just put this out, the semi-legendary results of the time in 1980 that ACR, Martin Hannett and Grace Jones assembled in Stockport's Strawberry Studios to record a cover version of Talking Heads' Houses In Motion. In the end Grace never completed her vocal for the track so Jez Kerr's guide vocals are used instead (from a period when Jez wasn't even ACR's singer yet). How this has managed to lie unreleased for nearly four decades is something of a mystery but now it's here and, as they say, better late than never, the Eno- produced New York funk of Talking Heads transplanted across the Atlantic to a side street in northern England at the start of the 80s. Taut bass, monotone vocal, congas and some stunning distorted, choppy guitar playing from Martin Moscrop before those wonderful, off key horns.

The video is completely new but fits the general vibe perfectly. The song is the from the vaults find of the year so far.
Posted by Swiss Adam at 08:00

I'm no ACR expert, but this is ace.

Yet again ACR showing why they're excellent.

Excellent and as londonlee says I can also imagine Grace Jones on this. It sounds surprisingly contemporary too - or is that just because contemporary is sounding increasingly retro?!

I'd love to hear Grace sing on it along with Jez's vocal.

And yes it does sound very contemporary

I am a self styled ACR expert and this truly is ACE! If the Head's original is the product of intense interest in the sound of the growing Afro Funk sound in 1980, ACR provide the Leftfield, Jazzy counterpoint, while keeping the feel of a Yoruban tribal ceremony bubbling under.
Is it possible a 39 year old track could top my list of favorite tracks of 2019...it's very possible!

Wonderful. You can count me in on that box too.

Thanks for posting, i'd heard about it, now i've heard it, great. This has that early organic sound that they originally had. I think they really lost something when Simon Topping left. The weirdness and intensity of his vocals. As the 80's progressed their sound became over produced (well it was the 80's) The expert organic drumming of Donald Johnson was lost in a Jam and Lewis kind of sound, but hey what do i know? Incidentally Angelique Kidjo has done a great reworking of the entire 'Remain in Light' album. How can you tamper with a masterpiece i thought, but i was surprised by the vibrancy and energy of her version. If you've not heard it, it's well worth a listen.
-S.R.C

I can't find the right words to praise this song. it is fantastic, timeless and made my day. Thx Adam.