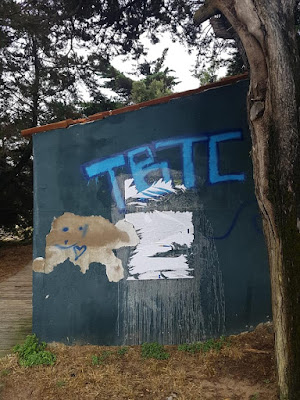 Released in August 1979, forty years old this month,  Bela Lugosi's Dead was the debut release by Bauhaus, a single recorded live (or undead) in the studio during a six hour session. The song is a weird opening statement, a nine minute dub goth track that starts out with skeletal drumming, creaking sounds as if doors are opening and then the scratchy dub guitar. Peter Murphy's vocals don't come in for several minutes, the song unwinding slowly but with intent- 'white on white translucent black capes/ Back on the rack/ Bela Lugosi's dead/ The bats have left the bell tower... Bela Lugosi's dead/undead undead undead'

Enjoy your August bank holiday in the sunshine.

40 years old? Blimey. I bought it on the day of release. A stone cold classic.

40 years old... that is very scary.
Do you know the cover by Chvrches? It really shouldn't work, but somehow, for me, anyway, it does... https://www.youtube.com/watch?v=7pysWQPGcfM

Not heard that cover before but I like it.
Sorry about your non- bank holiday status CC. Not rubbing it in honest.

I hope your copy is in better shape than mine, think of the noise that a huge bowl of rice crispies would make then x by 10. Only Goth record I own I think