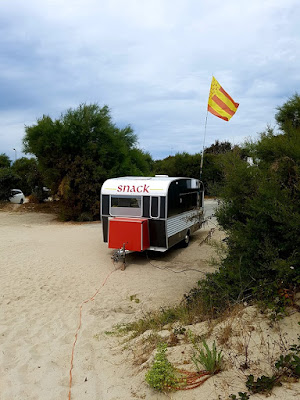 In the early 90s Sandals, a four piece from South London, signed to Acid Jazz and put out a series of 12" singles and an album called Rite To Silence. They came up in conversation in a social media post a few days ago and I thought it was time to put some of their music back up here (the last time they featured was back in 2012).

Sandals came together from the club scene and various record stalls and clothes shops, eventually rehearsing in the storage room of a book/record/clothing shop they ran in London's Trocadero. They mashed together a heady stew of beatnik spoken word poetry, soul, funk and jazz, lots of percussion and bongos, some heavy grooves and early 90s clubland sounds.

Debut single Nothing, from 1992, was produced by Leftfield and predates the trip hop sound by a year or two. Samples of voices, boom- boom- bap drums and whispered/stoned street poetry.

In the same year they put out a second 12" single, produced this time by Gary Burns and Jagz Kooner of Sabres Of Paradise, with a more progressive house sound. It was remixed by DSS (David Holmes and Ashley Beedle). It opens with Country Joe's Woodstock crowd participation exercise, 'Give me an F! Give me a U! Give me a C! Give me a K! What's that spell? What;s that spell?' The techno drums come in and Derek Delves begins singing/chanting about the mess we're in, war, the environment, general madness and bad times. It couldn't be more relevant today, the best part of three decades later, if it tried. This being a 1992 progressive house remix it goes on for twelve minutes, never really letting up. Exhilarating stuff.

Also from 1992 was this one, A Profound Gas, which I played loads at the time and still sounds great today. Flutes, guitars, pan pipes, chunky drums, production from Leftfield and more beatnik poetry with some memorable lines and imagery.

The group disbanded in 1996 having had a second album rejected by London Records. It was eventually released in 2009 in Japan. A copy came my way recently and when I've fully had a chance to listen to it, more Sandals will be coming this way.
Posted by Swiss Adam at 08:00

I loved Sandals and was fortunate enough to see them live at the first Phoenix Festival. Thanks for the heads up about the 'lost' second album, I had no idea it even existed!

I've got the first album, plus singles on CD including the Cracked EP and the US version of Feet with a rarer Slam mix edit. In another dusty box in the attic, I've also got a Sandals mix cassette which was a freebie to mailing list subscribers.

Unfortunately, I'm currently without the tech to convert my collection to files, but when I do, I will be happy to share if there are any oddities you'd like to post here.

The mix cassette sounds interesting. Think I've got the Slam edit, will check. I never saw them live, wish I had.