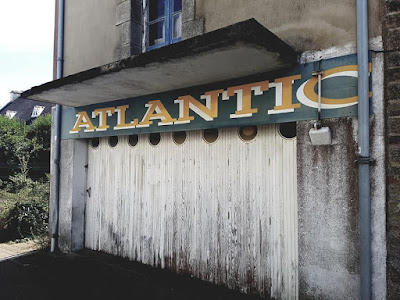 Boom! Two booms today- I can't remember exactly why either of these songs came into my head recently or if one sparked the other but I thought it seemed like a decent idea for a post.

Happy Mondays released Wrote For Luck in October 1988, a record around which an entire scene could be/was built, a riot of guitars and dance beats with Shaun Ryder's surrealist swirl of words reaching a peak. The first 12" release of Wrote For Luck with the famous Central Station sleeve had a B-side called Boom, a three minute extra that didn't make the cut for Bummed. Boom opens with heavily reverbed drums and then that queasy musical stew the Mondays created in 1988, keyboards and guitars and bass all fighting over the same ground, the instruments all over each other searching for space. Shaun delivers more wisdom from the microphone, tales of cabbies and drugs and living in a box with cardboard socks. I don't know if Martin Hannett produced Boom. He produced Bummed and this song sounds like it comes from the same place (a studio in Driffield, East Yorkshire with mixing done at Strawberry in Stockport).

In 1991 The Grid released a 12" called Boom, progressive house, pianos, synth stabs and bleeps, thunderous bass and chunky drums heading for deep space. The single came with several mixes. The one here is the 707 mix, presumably named after the drum machine which powers it. Not much to say about this slice of Richard Norris and Dave Ball music other than it is very good indeed.

As a postscript- and this only occurred to me while writing this post- in the same year the two came together, Happy Mondays remixed by The Grid, two tracks from their Pills 'N' Thrills And Bellyaches album. It was a 12" I didn't get at the time- you couldn't buy everything could you? I don't own either of the remixes on CD or mp3 either so it's Youtube only. One of The Grid remixes was of Bob's Yer Uncle, Shaun's dirty talking sex song (a song incidentally that Tony Wilson selected to be played at his funeral which must have caused a few sniggers). The other remix was of Loose Fit, a low slung, smokey vibe of a song with a snakey guitar line and Shaun muttering and growling about a loose fit being his way of life. The Gulf War features too- 'gonna buy an air force base, gonna wipe out your race'. The Grid's Loose Fix remix isn't hugely different for the first few minutes, reworking the drumbeat and stretching everything out, gradually departing at the half way mark and going off into the distance slowly and hazily.

That Grid track is a personal fave

Both great mixes by The Grid. I managed to pick up the 12" single a couple of years later from Jumbo Records in Derby and they appeared on loads of mix tapes over the years.

Both mixes were eventually released on CD:

Thanks Khayem- a kind reader supplied me with mp3s of the 2 Grid remixes after reading the post.