They Say That Country Life Is Hard To Beat 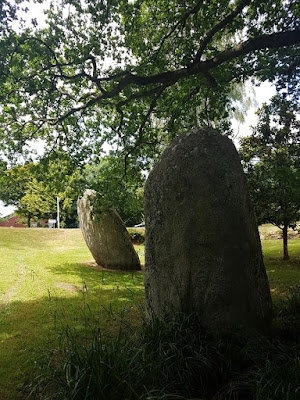 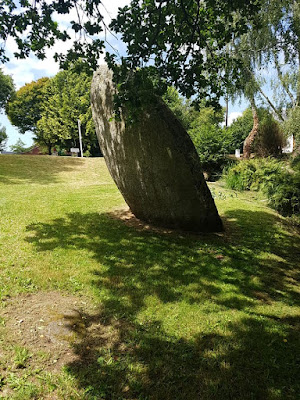 It would be a strange trip to Brittany without taking in some prehistoric sites. These three menhir stand in the very quiet village of Plomelin not far from Quimper. I like a bit of a challenge with standing stones and dolmen, a field to trek through or a bit of a search but no such luck with these stones- they stand in a very well cared for spot at the centre of Plomelin with a space to park the car, a distillery across the road and a stream running through them with a small bridge.

Writing about prehistoric stones leads to going on to write about Julian Cope. Looking back at his rebirth in 1990 he was way ahead of the curve with all sorts of things- opposition to the Poll Tax was a very current concern shared by hundreds of thousands and then there's his environmentalism, distrust of government, interest in women's rights, opposition to mass car ownership and car culture, hatred of organised religion (on the sleeve notes to Peggy Suicide he writes at length about the replacement of Communism by radical Islam in the eyes of the military, governments, media etc).  Copey was in there with all of these and more. His book on prehistoric sites The Modern Antiquarian then placed him as a serious chronicler and authority with actual historians calling his book 'the best popular guide to Neolithic and Bronze Age sites for half a century'.

In 1994 Cope released a CD single, four versions of his song/album track Paranormal In The West Country. To get it you had to buy his Queen Elizabeth album. This would come with a sticker which you had to return on a used envelope. On receipt of that Cope would send you the Paranormal CD. The best of three new versions was this one recorded with The Leone Quartet.

Paranormal In The West Country (With The Leone Quartet)

Julian has a new album for sale at his Head Heritage site, a five track mainly instrumental tribute to John Balance of Coil called John Balance Enters Valhalla, 'five mesmerising rhythm- laden tracks... hefty grooves that shimmer and shake' according to the man himself. It's difficult to keep up with Cope and his output but this one is worth your time and money. Buy here.

When I saw the title I immediately thought of the adverts for the butter (I'm sure a few others have as well)
I like that Copey doesn't give a toss if he's commercial or not any more. Makes music because he likes to make music.

Yep, no commercial concerns at all, just does what he wants to do. Admirable.

...and the CD arrived in the post 'as is' with the address & stamp on the sleeve itself, no packaging!

I thought all of the versions were great, but particularly love the "Avebury" take, with the group sing-a-long and Copey toning down his language at the end, as the kids are around!

Ha, yes Khayem, the toned down language on the Avebury version is very funny.