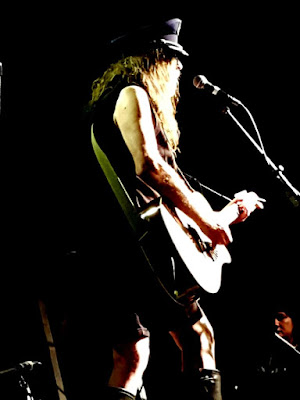 Julian Cope played the second of two nights at Gorilla on Saturday night, a wide ranging one man show with songs from his back catalogue (from The Teardrop Explodes through to the new Self Civil War) and plenty of story telling and comedy in between. Cope is announced on to the stage by his roadie and appears in Luftwaffe cap, shades, sleeveless hooded top, shorts and biker boots, promising us that he won't talk too much and then proceeds to do exactly that- not that anyone is complaining. Cope is an accomplished raconteur as much as anything else. He kicks off with a long story about buying the title Grand Prince of Pomerania off the internet and then goes into Soul Desert following that with a new one, Your Facebook My Laptop. We get Read It In Books, interrupted by Julian filling us in on the genesis of that song, what he calls 'the writing group' he was a member of (The Crucial Three of legend), the birthplace of both the Bunnymen and The Teardrops, it's riff borrowed from a Fall song (Mark E Smith and Martin Bramah are both nodded to) and Ian McCulloch's role in it, with some gentle piss taking of Mac. It's not nasty or personal- he takes the piss out of himself and out of us too.  All the songs bar one are played on acoustic guitar and fleshed out by FX pedals including an epic Autogeddon Blues, a brilliant They Were All On Hard Drugs (which has a lengthy preamble, as you can probably imagine, which finishes with him describing finding four different types of magic mushroom within a few hundred yards of Stonehenge), Cromwell In Ireland, Drink Me Under The Table, The Greatness And Perfection of Love, a sparkling run through World Shut Your Mouth, and Treason. When all his songs are presented like this, one man with his guitar, they seem more and more part of the same story- there's real no separation between the Teardrops pop hits and his current cottage industry album. He jokes about the Teardrops, that he approached the others about putting them back together but the rest of the band were just too out of it. He jokes about the stream of near hits he had as a solo artist, all of them peaking at number 42. He tells us about painting a Messerschmidt- a model not a real one- and having some deep grey paint left over at the exact moment a brand new Fender guitar is delivered. He then plays the next song with the guitar he painted. He mentions his poor promotion of his new albums and then repeatedly remembers to promote Self Civil War. He reminds us of the criticism that his songs are ba- ba- ba songs, then plays the ba- ba- ba songs, proving what a great songwriter he is. There's a long discussion about folk music and his issues with it and then we, the folk, are encouraged to join in with the 'Oi' backing vocals.  For The Great Dominions he moves onto the synth with his roadie accompanying him and then goes back to the guitar for a marvellous Pristeen and finally a crowd pleasing Sunspots. He hams up the leaving of the stage, revelling in the applause while undercutting it too, and then returns to play Out Of My Mind On Dope And Speed. There's not really anyone else quite like him- so esoteric, so open, so poppy but so versed in the underground. Long may he run.

Someone who has long been on my list to see live but I never got round to it. Unlikely I will now unless he plays very locally, but your review made me realise I need to keep an eye out.

Same here Rol - sure I got to see TE in its prime when they played NYC around 81 and solo twice promoting St. Julian and My Nation Underground, but to see him in this "magical" period of his career would be a great event.

I was lucky enough to see him in London earlier in the tour. As you say, well worth going along if you get the chance.