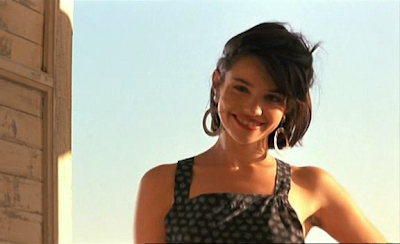 There's nothing much that's original in this post, just some internet blogging repetition. I'm pretty sure both Drew and London Lee (and probably others as well, I'd be surprised if Davy H hadn't) have blogged about the late 80s French film Betty Blue and it's beautiful star Beatrice Dalle. And maybe originality is over-rated anyway. Beatrice was the perfect poster-girl for some of us in the late 80s- that dark hair, those deep eyes and full lips, the scant clothing in the film, the life in the beach house, the descent into insanity and assaulting other girls with forks, followed by suicide. She (Betty/Beatrice) was the kind of girl we fancied like mad but were also terrified of. Helpfully an uploader at Youtube has edited some of the more unpleasant parts out and created a seven minute Hommage a Betty, a 'smooth version without the drama' although she still burns down the beach house and covers that man's car with paint.

The soundtrack by Gabriel Yared is a good listen- some of the guitar is a bit too late 80s but it has a very laid back charm. I've got the vinyl lp of this- I don't remember buying it and don't remember anyone giving it to me either. It has just appeared in my record collection at some point over the years.


Bloody hell. Beatrice. You almost have to light up now. Bugger.

Found posts by Drew and LondonLee about Betty - both with me commenting! - but amazingly none by Davy boy.

Me and a friend still say "Le Pizza de Eddie!" in French accents to each other. We're sad bastards.

Ever seen the extended director's cut? Too long, unfortunately. Though it does fill in some things that were in the (very good) novel that the previous version left out.

Simon- excellent post.
LL- haven't seen the director's cut no, may go have a look for it.

I never thought you could have too much Betty Blue but three hours is bit much.

The gal is gorgeous!

To this day, you can not convince me that she and costar Jean-Hugues Anglade were not actually having sex in the opening scene of the film.