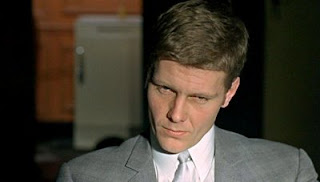 'You know, I don't think I'm going to let you stay in the film business'

Big Audio Dynamite's E=MC2 is a big Bagging Area favourite, with it's guitar riffs, drum machine, samples and lyrics all piling up on each other. Inspired by the films of Nicolas Roeg (Performance, Walkabout, Don't Look Now, The Man Who Fell To Earth, Insignificance) the song is littered with vocal samples from Performance (provided by Don Letts' primitive sampler) and lyrics that reference those films (provided by Mick Jones). Albert Einstein pops up (from Insignificance) the 'scientist eats bubblegum' and gives the song its title. BAD had other great moments but this is up among them as their best.

The line giving this post its title is from Performance, said by Chas (James Fox) to Turner (Mick Jagger). Jagger was at his counter-cultural peak when Performance was filmed in 1968- freed from jail the year before on drugs charges, a Street Fighting Man, shagging Anita Pallenberg (then Keith's girlfriend) in the opening sequence of the film, all long hair, lips and Sarf London drawl. In 2013 he's just a wanker who says he liked Margaret Thatcher and couldn't understand why anybody wouldn't. Enjoy 'Glasto' Mick.
Posted by Swiss Adam at 08:00