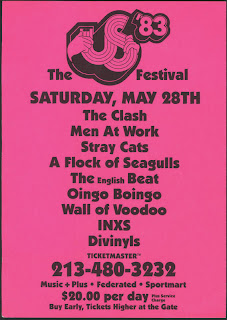 This was the last gig Mick Jones played with The Clash, in front of 250, 000 people. The Clash had truculently refused to play hours before their stage time but relented. There was an argument with Dave Lee Roth about the $1.5 million Van Halen were receiving and Joe insisted the organisers, including Steve Wozniak of Apple fame, pay them more or donate more to Clash approved charities. This led to a pissed off Clash taking the stage and the tensions are evident in the clips- the whole thing was recorded- although some of the tension may be internal. Joe and Mick were barely speaking, Mick and Paul rowed on and off. As a result, Mick was playing his 80 minutes on stage in the band he formed. Topper was gone too by this point, replaced by Nick Howard (who had replaced Terry Chimes/Tory Crimes). During the show Joe repeatedly abused the audience and organisers and on leaving the stage (even more pissed off that the dj began playing songs straight away, denying them an encore) the band got into a scuffle with security. During the brawl, in a last display of band unity, Paul waded in to stop Mick getting a kicking ('cos he's only a skinny bloke Mick isn't he' said Paul). Having said all this, for a band adapting their set and sound to stadiums this is top stuff. Mick, Joe and Paul are tight and the drumming is good enough. Paul looks like the coolest bassist in the world and can clearly play the thing too, without the notes panted on the fretboard like in the early days. However you look at it, it's a long way from Camden Town in 1976.

There's some variable quality clips on Youtube. The whole show is there but a lot of it has been filmed by a man watching it on video on his TV in his front room. The two below are straight from the DVD and are good quality.


There's a new Clash box set in the offing, remastered by Mick and packed in a boom box/ghetto blaster designed by Paul, with demos and extra tracks (that have been available on bootlegs for donkey's years) and accompanied by all manner of trinkets, retailing at somewhere around one hundred pounds. It is ridiculous. Yes, of course I want it.

Another Clash boxset! Getting as ridiculous as Morrissey.

Oh, forget about the boxsets: I'd sell my wife for a set of those action figures!!

without topper they weren't the clash no more. gee he was drummy heaven
x