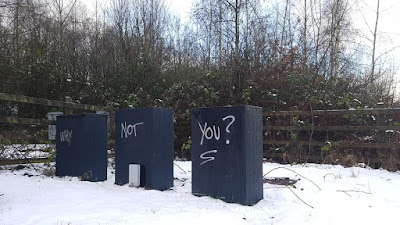 It's not really that unusual for the time of year but there's been a lot of snow around recently and it catches us out every time. One night last week, as the river was about to breach its banks and they opened the sluice gates at Didsbury and Sale Water Park (something they haven't had to do since 1990 I'm sure I read somewhere- truly, these are exceptional times) I walked out in the dark. If you'd told me a year ago that I would spend cold, wet, dark January nights walking the streets I'd assume I was in the midst of some kind of breakdown but this is where we are. I set out in slight rain, not even what you'd call drizzle. Within ten minutes it was sleet and then the temperature dropped a couple of degrees in a matter of minutes and it began to snow. 'This will never stick' I thought, 'too wet'. By the time I got home the cars were all covered and half an hour later the roads were too. It has snowed, melted and snowed again in the days since- not the lovely, soft, sound deadening snow we got on Thursday night but the thin, slushy variety. I woke up yesterday morning to go to work (yes, I know...) and the ground was covered again, snow with frost on top. The roads round here were ok, largely drivable but as I headed north through Bolton they were grim, icy and dangerous. As the lights changed to red ahead of me I touched the brakes and began to slide, helplessly, towards the junction, barely slowing at all, the wheels making that horrible grinding noise as they skated over the ice. Remembering that you're supposed to tap/ pump the brakes not press them down hard and swear, I lifted my foot and pumped, still swearing, the car coming to a halt about two car lengths beyond stop line. Thankfully the traffic to my right hadn't had the green light yet or I might be writing a very different blogpost. By the time I got home from work seven hours later, all the snow had gone. More due this week apparently.

This is a gorgeous, warm, eight minute remix of Underground System's 2015 song Bella Ciao, the sonic opposite of snow, ice and winter in the UK in 2021. The original is a Latin/ Afro update of a traditional Spanish song popular during the Spanish Civil War, a song celebrating freedom and resistance. On this remix Italian musician and producer Gigi Masin slows it all down, stretches it out into a ambient- Balearic crossover, finding all the time and space in the grooves and letting it gently flow by.

Edit: from Luca in Italy, 'I have to point out that 'Bella Ciao' is not Spanish, but "an Italian protest folk song that originated in the late 19th century, sung by the mondina workers in protest to the harsh working conditions in the paddy fields of North Italy"

Just the one day of snow (Sunday) down here in south west London so it's mostly melted away now. I completely identify with your descriptions of walking out in the dark Adam, who'd have thought it a year ago.
Nice track btw, your line about time and space in the grooves nails it.

Aargh, so glad you're ok, that's really scary.
Lovely track, soothing and Summery, the tinkling of pianos are also quite Summer-rainy... when it's warm and refreshing- don't mind that at all.

The song is lovely isn't it, gives a bit more every time I play it.

Whew. Thankfully it all ended up well. Great post, but I have to point out that 'Bella Ciao' is not Spanish, but "an Italian protest folk song that originated in the late 19th century, sung by the mondina workers in protest to the harsh working conditions in the paddy fields of North Italy" https://en.m.wikipedia.org/wiki/Bella_ciao

I stand corrected Luca, thank you.

Also keeping up with the daily walks... and usually in the dark. I carry a two-way flashlight that is red on the back end. I can’t quite bring myself to wear the miner hats I see Many of my peers wearing in the evenings. Gotta draw the line somewhere. Roughly 45 minutes away in the mountains the skiers are having a field day, but it’s nothing but non-stop rain here. After your tale, maybe I should be more thankful.

Glad to hear your snow story had a safe ending, Swiss Adam. And thanks for the music, a welcome ray of sunshine on a (currently) dark morning. I'll be listening to that again several times today.