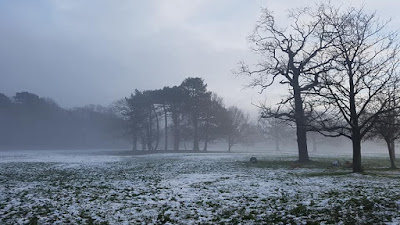 On New Year's Day Brother Joseph's Sonic Treasures radio show featured two special long form pieces from Nina Walsh's Facility 4 (the recording home of Woodleigh Research Facility, the musical vehicle of her and Andrew Weatherall in recent years). These two pieces were lined up to be played on Weatherall's Music's Not For Everyone but in February tragedy intervened, took Andrew away and the monthly radio with him. The first piece, C-Pij01 Facility 4 Day, is an hour of wonderful ambient wash, a combination of harmonium, synth, flute, cello, guitar, viola and trumpet and some voices (played by Nina, Franck Alba, Anita Hurst, Chris Cornetto and Marcos Alegria- this line up includes the players on Andrew Weatherall's Convenanza album as well as the W.R.F. records and I don't know for sure but I wouldn't be surprised if the Fort Beulah N.U. project is to be found within it's ranks too).

Day can be found at Soundcloud here.

The second part, Night, is two and a half hours long, introduced by Brother Joseph and then fading into distortion and noise, echoes and bangs before a song starts to take shape, guitar chords. Then back to ambient sound, FX and washes, drones and voices coming through the mist and the wandering trumpet floating on top. After an hour and ten minutes it dissolves, Brother Joseph returns and then the guitar/ bass/ drums kick back in, an 80s post- punk bassline with a lovely synth topline... and then there's more, twists and turns, musical sections mixed together, one segueing into another. Magical.

Night can be found at Soundcloud here.

Nina and Andrew's monthly Woddleigh Research Facility e.p. releases finished at the end of December. The final one was a single track, twenty three minutes long, called A Walk With Bill and Bob, Vol. 4. It's a trippy, experimental sound collage, almost a megamix-  a drum machine intro with some bursts of static and a dippy synthline. A lovely Peter Hook- esque bassline. Some woodwind and dislocated voices. Various vaguely familiar sounding motifs surface-  some of the elements from Andrew's Moton 5 e.p. appear and then disappear again. The drum machine keeps pushing onwards, 'in the here and now'.