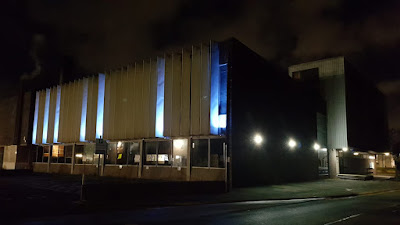 These are a pair of Mick Jones songs from 1993 that appeared on the soundtrack to a film called Amongst Friends. The CD opens with a B.A.D. II song (Innocent Child) and then veers wildly about early 90s alt- rock and rap with songs from The Lemonheads, The Pharcyde, Bettie Serveert, Tone Loc and MC Lyte while also finding time for Mott The Hoople's All The Young Dudes. I've never seen the film so don't know how much the songs play a  part in how events unfold- the story is centred around three childhood  friends now grown up and getting involved with local mobsters, filmed on location around The Five Towns (these are an informal grouping of towns on Long Island and not the five towns that make up Stoke- on- Trent in the Potteries). I'm assuming that at some point Mick Jones and director Rob Weiss were friendly because as well as Innocent Child and his own teenage favourites Mott The Hoople, Mick contributes three songs to the soundtrack. The two here, No Ennio and Long Island, are footnotes in Mick's long back catalogue but worth an airing periodically, Long Island especially.

No Ennio is an instrumental- twangy guitar and strings and a drum machine- and I suspect a tribute to Ennio Morricone, a huge Cash and B.A.D. influence (and this being a film soundtrack a Mick Jones joke in the title).

Long Island sounds like it was written for the film, the words and Mick's singing wistful and reflective, 'Life drags on, Long Island/Every dream could bring you to me/ As the evening winds, Long Island/ the days fall into the sea'. It plays over the credits apparently, Mick singing over a drum machine and some electronics, a bit of guitar and piano and after a breakdown in the middle everything coming back in with a solo. Nicely done and a long way from Sten Guns In Knightsbridge.

I'd pay good money to see a caper movie set in Stoke. It's got Shane Meadows' name all over it!

I'd definitely pay to see a film like that with a Mick Jones soundtrack.

As a resident of Stoke-on-Trent, though thankfully not for much longer, I must correct you – it's a city of six towns, not five. The confusion comes because Arnold Bennett whittled it down to five towns for his series of books in the Potteries. And capers? Stoke?

Ha. Thanks Tom W. While Googling the Five Towns (US version) I noticed that Stoke was actually 6 towns not 5 (but ignored it in order to make a small joke). Caught out!