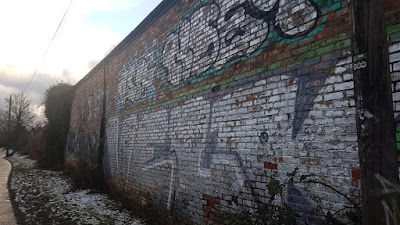 This album, Erratics And Unconformities by Craven Faults, came out last year. I missed it but am making up for lost time- six tracks, analogue synths and drones from the 20th century, used to conjure up atmospheres and surroundings. The album is inspired by and built around walks through the post- industrial landscape in northern Britain where the ghosts of people's lives and their work echo round the decaying infrastructure, extinct textile mills and foundries, canal towpaths and derelict workshops. The opener, Vacca Wall, is eighteen minutes long (here) and quite upbeat, full of promise and melodies beamed in from the Federal Republic Of Germany, circa 1974.

The last track, Signal Post is the shortest at only eight and a half minutes (here)  and is heavy, an ending, the sun going down on.

In between there are four others, the pick being Cupola Smelt Mill, the musical influence of Michael Rother and Klaus Dinger being felt and heard long after they started out, the synths hypnotising as the rhythms unfold in their own time. Superb stuff. Buy it at Bandcamp.

Enjoyed all these tunes, now listening to Vacca Wall. I can quite see how the music would form an atmospheric, if bleak, soundtrack to a walk.

Yep. I think you might want to put something a bit more up on after the final track fades out to see you home.

Started off with the Works EP's and they've just got better and better. The album is an absolute better. Their ability to conjure up an atmosphere is very impressive

Music to move you emotionally, though I might struggle with this as a walking soundtrack :-) Part of me feels that this is best enjoyed in a darkened room with as little external stimulus/distraction as possible, to fully immerse yourself in the music. Really, really good.

I featured this record almost a year ago and listened often to it. Can't explain why I didn't nominated them in my year end list. As you said - superb and timeless stuff.