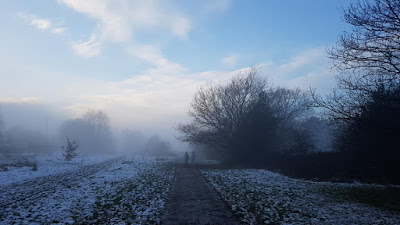 Bicep's second album Isles is imminent and this new song just came out ahead of it, a simmering, slow burn piece of 21st century dance music. Sundial is built around a faulty Jupiter 6 arp and a vocal sample from a 1973 Bollywood film, sung by Asha Bhosle. For all the euphoria of Bicep's music, all the peaks and builds, there's also a sadness to it, the melancholic flipside of hedonism. They know nothing lasts forever and that the night always comes to an end. At the moment, given the state we're in, it's almost too much- there is no night out, no communal dancing, no shared moments- but they also manage to offer the promise of better days ahead.
Posted by Swiss Adam at 08:00

It's funny because I've been finding it hard to listen to music that would normally make me want to go out, as you say it's too much at the moment. Looking forward to the Bicep album.

Try not to think about it too much Jake. Occasionally I really miss being at a gig but even with vaccinations the idea of attending a standing only gig in a small venue seems out of reach

Imagine how we're all going to feel when this is all over and we can properly go to a gig again not even thinking about the risks. Hopefully there'll be some small venues left...

Someday in the hopefully foreseeable future, going to a gig or out with mates will be as exciting as it was when we were young.
Bicep has managed to be really in touch these past months leading up to the release of Isles. They have managed a very Global sound on the past few singles. The previous single Saku also carries the melancholy that they have so focused on. It's another one I just can't get enough of.

Love this. Reminiscent of Third Eye Foundation and Future Sound Of London in places, but very much their own thing.