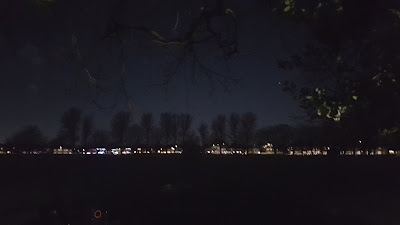 In 2019 Jane Weaver reworked her Modern Kosmology album as Loops In The Secret Society. 2017's Modern Kosmology was brightly coloured, folky pop, full of slightly off kilter songs but undeniably perfectly constructed songs with choruses and hooks. In 2017 Jane and her band played the old Granada Studios building on Quay Street in Manchester (on Youtube here) a thirty- five minute set of songs from Modern Kosmology. If you've got half an hour to spare Jane's motorik, folk tinged psyche pop is as good a way to spend it as any and the performances here are stellar.

Loops In The Secret Society was a different kind of record, a more experimental album, the layers of instruments stripped away, dusk (or dawn possibly) settling over the daylight songs of the previous album. There were lovely short tracks of ambient and found sound, whirring and clicking rhythms, Radiophonic Orchestra sounds and repetitive, meditative, psychedelic songs and new versions of songs from Modern Kosmology.

The version of H>A>K on Loops In The Secret Society is a skeletal, murky reworking, deconstructed to a throbbing synth sound and Jane's voice, FX sending the vocal juddering into space, and then a very West German drumbeat pushing it on.

Jane's new album, Flock, is out in March, ten songs long and promised to be 'day- glo pop... produced on a complicated diet of bygone Lebanese torch songs, 1980s Russian Aerobics records, and Australian Punk', which definitely sounds like something to look forward. A single came out last October called The Revolution Of Super Visions (video here). I skipped past it a bit at the time and that was my loss because is more excellence from Jane, with more than a dash of Prince- shaped funk added to the super- powered psyche pop. Now there's a second tune out ahead of the album, a song called Heartflow- dreamy, swirly, slightly esoteric folk- psyche with a beautiful video by Douglas Hart. You can order Flock from Bandcamp.

Jane Weaver is awesome. I was very late in finding her music - it was a Marc Riley session in 2017 that opened my eyes - and I'm trying to work my way through her previous albums. A new album in 2021 is great news. And thanks for the performance link - you're absolutely right, Jane and the band are brilliant throughout.