Put A Candle In The Window 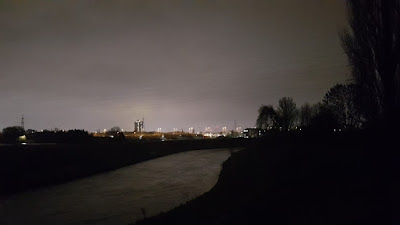 I was out walking last night, in the rain natch (it's been pouring down all week). We (me and my daughter) went to see how high the Mersey was. Pretty high was the answer- up to the top of the banks and over the paths in places. I could see the river skirting the underneath of the bridge I drive over when I come off the motorway towards home. The picture above doesn't really do it justice or show how fast it was flowing and at the point I took the photo the banks and high and steep so it looks lower than it is. Walking back home this Monkey Mafia cover of a Creedence Clearwater Revival song started playing in my head.

Long As I Can See The Light

Monkey Mafia put this out in 1998, a 12" single in 1998, a downtempo, after hours reading of a 60s classic with squelchy bass, a slow, dusty beat with scratchy, smoky vibe and the voice of Shirzelle. I bought it at the time and find myself coming being drawn back to it now and then. Adrian Sherwood remixed it, bringing the dub influences to the fore and adding his own special brew. It's a gorgeous dub mix of an already lovely cover.

Long As I Can See The Light (Adrian Sherwood's Dub Lightning)

And then when I considered everything it seemed that this was also a perfect song for today, a song I'd like to offer to all my friends and the friends of this blog who live in the U.S.A. and to mark the end of what for a lot of them has been a four year waking nightmare, that to some extent is coming to an end today.

'Put a candle in the window/ 'Cause I feel I've got to move/ Though I'm going, going/ I'll be coming home soon/ Long as I can see the light'

Excellent post and song selection, Adam. Coincidentally, I was listening to Sherwood's Dub Lighting version a lot during the first weeks of lockdown #1, so it feels apt that it's popped up again during #3. Yesterday was momentous, tarnished only by giving the Tangerine One more air time. In addition to SRC's comment above, let's hope for at least a few weeks of radio silence from the bilebag whilst he sulks in Florida.

That's a great song, thanks for posting it.