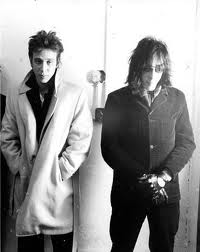 Richard Hell (above left with fellow Voidoid Marc Bell on the right) has got a pretty good claim to be one of the original punk rockers (70s variety, New York). Malcolm McLaren freely admitted the look came from him, he left Television in 1975 and wrote one of punk's essential texts (Blank Generation, which he says everyone got wrong- it's blank as in fill in the blank not blank as in vacant). With its choppy riff and vocal it's a song that still sounds fresh today. Hell also wrote the very punkish Love Comes In Spurts. Drugs and bad timing left Hell and The Voidoids out in the cold.

I met him at a book signing in 1996/7ish. He'd written a novel (Go Now), a beat generation/punk rock novel, and put his shades on to read passages from the book, removing them afterwards. He was pretty surly when I got to the front of the queue to get the book signed. But maybe I was too.

.......that's one of the (admittedly few) downsides of living in Perth, Western Australia - I'm no chance of seeing the likes of Richard Hell at a book signing. I did see the Violent Femmes busking in the CBD a few years back though.....

Oh this is cool! Thanks for posting it! :)