They Shall Not Pass 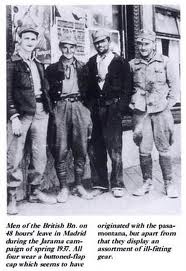 I was thinking, following Sunday's post, about whether I could put together a Spanish Civil War themed mixtape. Stick with me, these are the things that sometimes occupy my mind when driving. I've got this far-

1. Durutti Column- Sketch For Summer (it could be any Durutti track really, but this one's my favourite unless anyone can think of a more appropriate one. Durutti was an anarchist-syndicalist leader during the war, as I'm sure you knew)
2. Manic Street Preachers- If You Tolerate This Then Your Children Will Be Next (see Sunday's post)
3. The Clash- Spanish Bombs (obviously)
4. The Pogues- Lorca's Noveno (posted here a long while back, the song tells of the murder of poet Federico Garcia Lorca by the Francoist Falange)

And that's it. A fairly short mixtape unless anyone's got any other suggestions.
I wondered about ABBA's Fernando but I'm not convinced it's about Spain.

This could go on actually if we don't have a rule about the same song featuring in different versions- a dub cover of The Clash's Spanish Bombs by O' Luge and Kornerstrone Allstars from a dub tribute album to The Clash called Shatter The Hotel (a line from Spanish Bombs).

Interesting idea, there is also Guernica by the Stone Roses.

There must be more

I nominate 'Viva La Quinte Brigade' by Christy Moore from his album 'Ride On' which commemorates those, specifically Irishmen, who fought in the International Brigade against Franco (and the Catholic Church). Terrific song, even though he got his Spanish wrong and later had to correct the title to 'Quince Brigade'.

Give me a shout if I can furnish you with the mp3.

I completely forgot about Guernica Drew.

Here you go. It's 'Brigada' of course, not 'Brigade' - serves me right.

Ta for that Davy

Thanks Helen, will have a look at the Billy Bragg one.

Helen - Seeger's is a different song (the original Spanish one).

Leonard Cohen's Take This Waltz is a translation of a Lorca poem, so that's another...