Fail We May, Sail We Must 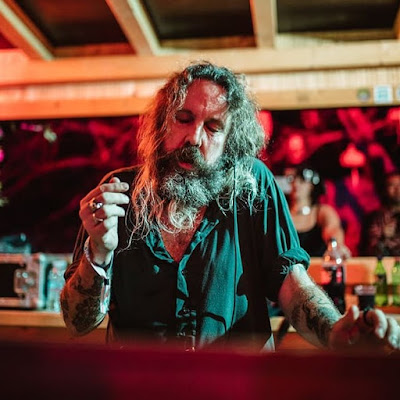 It's now over four months since Andrew Weatherall's passing. This weekend would have been the 50th Glastonbury festival. Former Sabres office man Andrew Curley has been working with the Glade Area Glastonbury to put together a day long tribute featuring an all star list of Lord Sabre's musical compadres from the past three decades, each contributing a mix in his honour, for a virtual festival. They dropped at various times yesterday, a Three O'Clock Drop, a Six O'Clock Drop and a Nine O'Clock Drop. All are available at Mixcloud for repeat listening. Obviously it's too soon for me to review each one- there are thirteen in total and I have other things in my life which restrict me from enjoying DJ mixes in permanent rotation for twenty one hours. And I need to sleep. These mixes will be enjoyed slowly over the days and weeks to come but there must be something for everyone here- Sherman at the Controls with an outstanding hour of dub, The Orb's Alex Paterson, a blistering set from Richard Sen, dance magic from Scott Fraser, Sabresonic's Alex Knight, former Sabre Of Paradise Jagz Kooner and Primal Scream's Andrew Innes rock 'n' roll/ northern soul extravaganza, Rico Vincent's Double Gone Chapel mix, Rick Hopkins bringing the Blood Sugar, fellow- Asphodell Timothy J Fairplay, ALFOS stalwart Sean Johnston, Keith Tenniswood with a Two Lone Swordsmen set that starts at 0 bpm and builds from there and something truly special from David Holmes. The full line up is below. All the sets can be found here.

Edit: I'm three sets in, spacing them out so as to enjoy them each fully. The Sherman dub set is a joy, an hour of serious dub vibes and several tunes with Andrew's stamp on them, some Clash and Killing Joke, King Tubby's Dub Fi Gwan and plenty more besides. Alex Paterson's house music funfest sounded great in the garden last night. Any set that opens with Ralphi Rosario's You Used To Hold Me is setting out its stall. Rico's Double Gone Chapel mix is sixty minutes of hotwired blues and amped up rockabilly. Tremendous stuff and testament to Andrew Weatherall's tastes, influence and impact. Andrew Curley has done an amazing job putting this together and pulled it off with aplomb. I'm sure that Andrew would shake his head a little and smile, downplay it- 'it's just playing records in a disco, dear boy'- but the spirit of the man and his thirty years in music is shot through these mixes in huge measures. 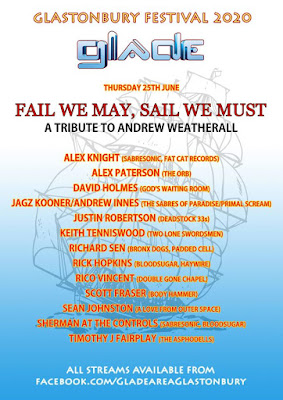 The ships are in the harbour. We are ready to set sail.
-SRC

The Holmes one is emotional.

Not got to the Holmes one yet. I've been told it's an emotional ride.

I started this morning with Sherman and it is a perfect start into the weekend. Now I know what to listen to until next Monday. Thanks for guiding me to this Adam

That Kooner and Innes set is superb. Rock 'n' roll and soul. Dancing in the kitchen to it!!