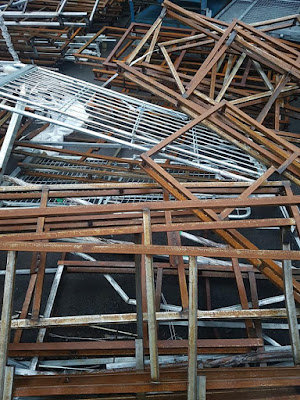 Green Gartside, the voice of Scritti Politti, has unexpectedly released a 7" single through Rough Trade. If you're quick you might be able to track a copy down. The release has two songs, both covers of songs originally by legendary English folk singer Anne Briggs. There is a lot of back story to the single involving Green's pre- punk love for folk music, Morris dancing, dressing as a 19th century farm labourer but with eye liner, Fairport Convention and Martin Carthy. Green's Scritti bandmate Rhodri Marsden had been asked to do an arrangement of an Anne Briggs song and asked Green if he'd like to sing on it.

Tangled Man is the A-side, a gorgeous take on the original with Green's voice sounding as ace as ever over some lushly recorded acoustic guitar.

The B-side is Wishing Well, less instant than Tangled Man but with some dubby FX alongside the guitar and multi- tracked vocals.

I hadn't heard about this, it's rather lovely. Has our chum Brian been informed?

Hi fellas. Yes, all over this one. The copies at Rough Trade over here sold out of the 7" immediately. I assumed there would be more but wasn't willing to take the risk of waiting and ordered it from Rough Trade UK. That was about a week ago so shouldn't be too much longer. In the meantime, I have listened to both songs at least a dozen times. An incredible return to form. Is it too much to ask for more from my hero?

An album in this vein would be great.

While both covers are simply wonderful, I find Wishing Well to be superior! There is something in the approach on Wishing Well that makes the song completely a Scritti Politti song for me. I have to say the Tangled Man video adds a timely and substantial layer to the power of the song.

They are both indeed wonderful. Green never loses it does he? Saw him/them supporting Saint Etienne a few years ago and they were fantastic. Simple but effective arrangements of some complex songs.

A friend's just pointed me to another new Green Gartside vocal that completely passed me by, from February this year. He appears on the final track of Philippe Cohen-Solal's album, Mind Food. You can get the song and/or album on his Bandcamp https://philippecohensolal.bandcamp.com/album/mind-food There's also a radio edit available on Apple Music, Amazon, etc. Another great vocal, as if it needs to be said. Cheers, Khayem