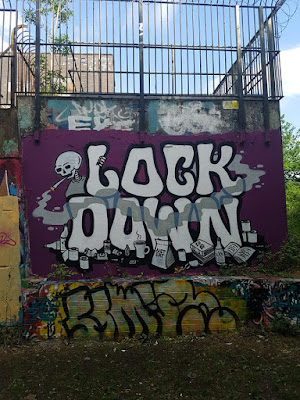 Jah Wobble posted his latest lockdown tune, this one titled Post Lockdown Dub, the most upbeat of the eight songs he's written and recorded since mid- March. It's a great little song with a sprightly tempo, horns, uplifting piano and keys and a nice bubbling bassline.

Despite my love of the tune I'm not sure if the optimism is that well placed. The lockdown has seemed over for a lot of people since Dominic Cummins got busted and Johnson defended his senior adviser's right to do what he liked. Now it looks like for many people it's over completely. Shops may be set up for social distancing but on the streets and in public places it looks like many people think it doesn't apply to them. We are still shielding so for us very little has changed. When everyone was in the same boat it seemed much easier. Now through loosening the lockdown and the government's mixed messages and incompetence everyone is in different boats. The UK has the highest death toll in Europe which ever way you slice the figures, whichever set of statistics you use, and the third highest in the world. Countries that looked like they had beaten the virus are now reporting outbreaks again and having to reintroduce measures- New Zealand, Germany, China. The criticism for not prioritising schools is being deflected onto the teaching unions and the Labour Party (schools have had guidelines from government about social distancing- the government's own guidelines are why they've been unable to re- open). The UK's supposedly 'world beating' track and trace system won't work fully until the autumn and the government has gone on to prioritise re- opening the economy over public health. Queues formed early on Monday morning as non- essential shops re- opened. Talk of reducing the 2 metre guideline to 1 metre is giving out the message that getting pubs and restaurants serving again is more important than controlling the virus.

Eat out. Forget the virus. Fuck the NHS.

Maybe everything will be ok.

Fuck this government. Fuck the stupid way they have dealt with this and fuck the eugenics fan who seems so indispensible to them. I never thought I'd loathe anyone morenthan Thatcher but I've never been as angry as I have for the last three months or so.
Which is why having blogs like this are a genuine balm at the moment. Great tune fom Wobble. Just a hint of ACR in there maybe?
Thanks for keeping keeping on.

I know, simmering rage is one of my default settings at the moment.

Sine this post was published this morning the government have announced that the threat level is reduced from 4 to 3 and they are expected to announce a shortening of the 2 metre guideline to 1 metre later today. But who trusts them? And who trusts the reasoning behind their decisions?

Simmering rage is a really unhealthy feeling though, and I have to make continued efforts to rein it in. Walking, cycling, listening to music and reading have been completely indispensible this last few months.
As for the 2 metre rule changing, it's economy over lives. There'll be an enquiry one day and hopefully the shower of bastards will get their comeuppance. I'm just looking forward to the next election...I can wait...and hopefully the non Tory parties can work out a way to keep them out of office for ever because frankly that needs to happen.

Don't get me started about the fucking app. Money spaffed to Cummings family, Tory Party donors. This country is worse than all of the tin pot dictatorships that were once called "Banana" Republics. Shower o fucking shit