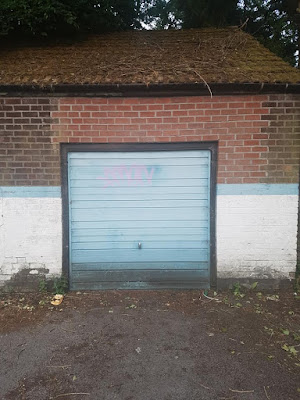 Back in March Timothy J. Fairplay relaunched three albums on Bandcamp that were previously only available on cassette. All three are packed full of drama, tension, melodies, retro- futuristic synths, ideas and noises bouncing around.

The title track to the seven track False Visions album, originally out in 2015, is an intense ride into electronic sound, all bouncing synths, keyboards, drum pads and compressed noise. It's quite a trip. Timothy has always been a king of song titles and False Visions maintains his strike rate with Bizarre Fables and Watergate Metaphor Love Scene up there with his best.

The Promise Of Midi, released for Cassette Store Day in 2014, seven more songs for cassette. This mini- album is slower and moodier, with John Carpenter vibes to the fore. Rooftop Meeting could soundtrack a spy exchange in 1980s Berlin or the final moments of the alien invasion. Given the state of the world at the moment, I'm sure some of us would welcome our extra- terrestrial overlords putting us out of our misery.

The final track on The Promise Of Midi was/is Sleighride/ Blizzard and it was remixed by Andrew Weatherall. In Lord Sabre's hands it becomes a magnificent, twice the length bass- led, dub FX grind and prowl.

The third of the three cassette releases is Good For Driving In The Night, first out in 2013, seven more slices of twisted, nocturnal synth- based exploration, finding room for disco, techno, electro, soundtrack melodies and chillwave. This is Deserted Trawler, a twinkly synth part over ominous chords and a general sense of foreboding.