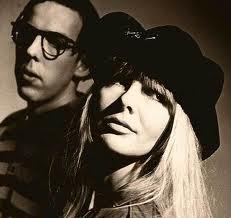 I managed to sit down earlier today and listen to an entire album, from start to finish. Bit of an achievement to be honest. The album was Saint Etienne's second, So Tough. Very enjoyable it was too. I was going to stick Foxbase Alpha on but didn't get the time and space, but I was reminded of this record. In between their two albums Saint Etienne managed to put out some non-album singles (and one that didn't get released, Everlasting, which is on the cd re-issue of So Tough). They also wrote 7 Ways To Love and gave it to Cola Boy, a duo of Andrew Midgley and Janey Lee Grace. Pete Wiggs and Bob Stanley were either a) trying to build a Brill Building style song-writing empire or b) worried that 7 Ways... rave cheesiness would kill their credibility (or c) both). Sarah Cracknell had sang on an earlier white label of the song but was contractually prevented from singing on the official release which by that point had been bootlegged widely. 7 Ways To Love came out in 1991, was a deserved proper hit. The follow-up, He Is Cola, wasn't. I like this song.

I like this song as well and can easily be mixed with Shocked by Kylie. Makes sense really.