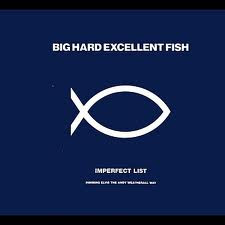 In 1990 this 12" came out on One Little Indian, a list of bad stuff, credited to Big Hard Excellent Fish.

The voice belonged to Wylie's then girlfriend Josie Jones and the track was written and recorded by an uncredited Pete Wylie along with Cocteau Twin Robin Guthrie.

In 2004 Morrissey used it to arrive on stage to.

The Imperfect List (Version 1)
Posted by Swiss Adam at 08:41

I've never even heard of this...
Thanx!

One of Wylie's masterpieces! This is an amazing good bye to the 1980's and all there was to forget about it. I hope Pete Wylie NEVER simmers down.