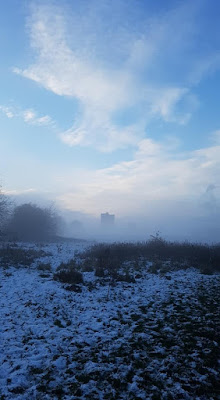 There were various posts running through my head for the final day of 2020 but in the end what does it matter? The year has concluded in sadly typical style with a day of rising Covid cases, tiering announcements and Brexit debacles. At this point, the year could only really reach a suitable climax if Godzilla and a plague of giant mutant locusts riding an asteroid crash landed in Piccadilly Gardens, proclaiming themselves the vanguard of an invading alien army, ready to enslave us all.

There doesn't seem to be much to look forward to in the immediate weeks of 2021 but by this point it's all we can do to keep on trudging on, wrap up against the cold and wait for it to pass. Lockdown 1 started in March, ten months ago, which seems a long time ago now in some ways. The wheel keeps turning. It will eventually be the spring. I hope you see in the new year in whatever way you can tonight, thanks to everyone who comes here regularly and irregularly, and let's raise a glass to putting this year behind us, as much as we can. Happy new year to you all, when it comes.

Aphex Twin still has a Soundcloud page up under the name User18081971, a dump for a multitude of lost tracks, unreleased gems, demo experiments and odd and ends. This one, 34 ibiza spliff, isn't there anymore and I don't seem to have an mp3 of it but it is a minor masterpiece, on the face of it just a lazy beat and some synth chords but it is much more than that. The very slight changes in the volume on the drums, the amount of reverb and the pauses between the notes, the space between the different elements, are all the touches of a master craftsman.

Also from the Soundcloud page is this, cut from similar cloth- a rhythm track and some melodies that sound downbeat at first but end up feeling more positive.

There's all sorts of freebies in there- I can recommend 8 utopia, bimbongo2 and his Joni Mitchell sample track titled parking lot and the two minute sketch called 7 summer festival love in the country. Some of them sound like pieces he started, worked on for half an hour and then saved and forgot about. Some sound like they could have been poured over for ages and then abandoned when a new idea came along. Impossible to tell but all fascinating and typically streets ahead of most of the rest of the field.

Yes let's raise a glass to the new year and let us hope for brighter days. Have a good one, Adam

Well said and here's to a better days in 2021 (eventually...)
Love the photo too. Happy New Year!


Thanks for a great blog and a Happy New Year to you and yours!

C- the photo came from a very wintry walk in Wythenshawe park yesterday, I've got several more to post where that one came from.

Happy New Year to you Adam

Happy New Year to you and yours Adam, and all who frequent this place...

Happy New Year Adam, to you and yours!!