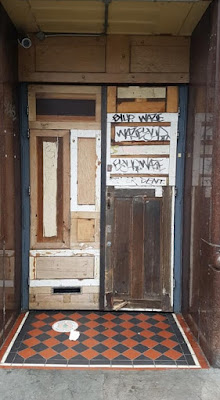 I've been watching the Small Axe series of films on BBC, five films by Steve McQueen looking at the experiences and lives of black Britons, especially the West Indian communities of West London. The writing and direction are superb as are the performances of the cast. The first film, Mangrove, over two hours long, tells the story of the Mangrove Nine, racist policing in the late 1960s, institutional racism and the growth of black activism. It's a film that boils the blood in it's portrayal of the police harassment of Mangrove café owner Frank Crichlow and subsequent the court case and it's a visceral and powerful piece of film making.

The second film in the series is Lovers Rock, a different take on the lives of black West Indian immigrants and their children. It's set in Notting Hill, where a blues party unfolds almost in real time, from the removal of carpets and the furniture from the front room to make space for the dancers to the sound system setting up while three of the women cook goat curry in the kitchen while singing Janet Kay's Silly Games. Early on in the evening the front room fills with young women, dressed up and wanting to dance. The dancing to Silly Games and the spontaneous singing of the song by the crowd after the 7" single has finished is superbly done, music (reggae specifically) as a joyous, communal experience.

The film is a celebration of these people's lives but it doesn't flinch from the racism that's never far away in 1975. Lead character Martha briefly exits the party to follow her friend who's just left but goes only a few yards up the road before being racially abused by a group of young white men. She returns to the blues party, McQueen showing how the black community, excluded from the area's pubs and clubs due to the colour of their skins, are forced to make their own entertainment and run their own parties.

The second half of the film kicks in after an altercation in the garden between three of the characters. The sound system moves onto harder and tougher tunes and the men crowd the dancefloor. The Revolutionaries 1976 single Kunte Kinte is spun, a rocking dub, and the crowd demand a rewind. McQueen's direction of the dancing is incredible and the intensity of both the scenes involving the sound system and the dancers are incredible. If you haven't already, watch both.

I'll have to check the Small Axe series out. Anytime I hear the intro to Silly Games these days, my brain immediately takes me to this. https://www.youtube.com/watch?v=qgD12LZhElk

I've watched both and they are powerful pieces. The house party was incredibly well done.