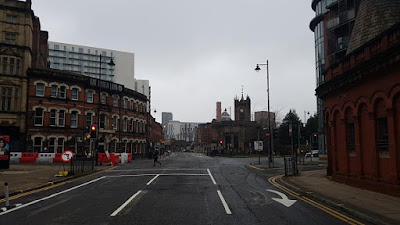 Twice now I've been in the Co- op and heard Paul Weller singing 'The sound of thunder on the ocean...' In late summer 2011 he released Starlite as a standalone 12" single, a song very at odds with the album that came after it (Sonik Kicks which had a much more guitar attack oriented sound and was led by That Dangerous Age, a middle age crisis, mod guitar- pop banger). Starlite harks back tot he more soulful sounds of The Style Council and the house music influenced album that was rejected by Polydor that contributed to the band coming to an end. The mid- pace groove, drum machine and squelchy bass, sultry acoustic guitar and Balearic vibes make this song a perfect summer evening tune, beers at the poolside bar as the sun melts into the Med, straw hats and flipflops. Instead it soundtracked buying a few odds and ends in a northern mini- supermarket wearing a winter coat and a facemask. Such is winter 2020.

I'm assuming, as my friend The Swede recounted recently, the song was playing because it's on the Co- op's inhouse radio station, Co- Op FM or somesuch or a compilation they provide to be played rather than sheer coincidence that a relatively obscure Weller solo song from nine years has been playing twice when I've shopped there.

More power to Weller though and his refusal to play it straight. He mines many seams and has developed a real restlessness in his approach to making music. A few years after Starlite he was recording Ethiopian dub with The Stone Foundation and Krar Collective.

I've always had a love/hate relationship with Weller; I'd not heard those dub tracks before - they're going straight on to a playlist! Thanks, Adam. J

I've dipped in and out over the last decade but always keep an eye out for what he's up to.

I think he's done some of his best solo stuff over the last 12 years or so, starting with 22 Dreams. There's a pleasing lightness of touch that isn't so evident in the years before that.

Weller has always had the boogie in him. The Blue Eyed house of the last few singles and the last Style Council album - Modernism - A New Decade, were accomplished and maybe just ahead of their time. Plenty of Blue Eyed House would follow and succeed in the market place.
I love Starlite - I live even more, that it was a one off. It feels like a bridge from Style Council to the Paul Weller Movement Era. The chorus just makes you smile and raise your arms - maybe even do a bit of a shuffle, with its 4 On The Floor rubbery bass. It is the youngest Weller had sounded for years when it came out.
There is a cracking Drop Out Orchestra Remix that deserves attention as well. It's full of effects and...acoustic guitar, even some strings that bring a Soul II Soul influence.

Yes Echorich, that Drop Out Orchestra remix is superb. Had half a mind to add it to the post.