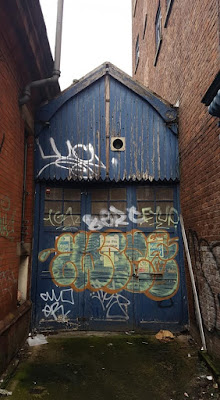 The new album by The Avalanches came out recently. I haven't heard it yet but the single they released back in the summer, Wherever You Go, was a firm favourite, space age exploration and the quest for peace set to appropriately modern music with input from Neneh Cherry, Jamie Xx and CLYPSO. Last week We Go On came out as part of the twenty five track album (We Will Always Love You), a song with Cola Boyy (not the early 90s pop- rave St Etienne offshoot sadly) and Mick Jones on board.

Mick Jones seems to have been in semi- retirement for the past few years but his London tone, familiar from The Clash and B.A.D., is clearly evident among the helium chanting and twinkling melodies. The album has guests to spare, the sort of list that makes me wonder if it can survive the weight of all those names- Johnny Marr, MGMT, Vashti Bunyan, Tricky, Perry Farrell, Kurt Vile, Karen O- but on the evidence of what I've heard so far, it seems that it can.

Today, 22nd December, is the eighteenth anniversary of the death of Joe Strummer, Mick's song writing partner in The Clash. This is a Christmas card Joe hand painted and sent to his friends in 2002. 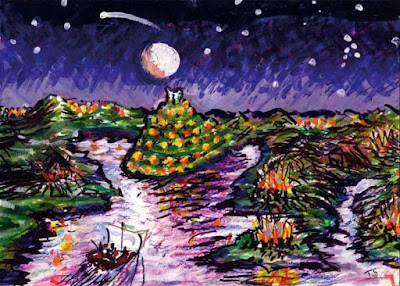 I don't know whether Joe would have guested on The Avalanches album had he lived but Mick might have cajoled him into it. Mick and Paul both played with Gorillaz a few years ago and I could see Joe having been drawn into that, his voice on top of that sound. The pressure for a Clash re- union would have grown greater, the clamour for a slog around the world's arenas and festivals would have been huge. There were times when he was alive when he was up for a re- union, it was talked about and they were almost ready to do it once but Paul was the one to say no, who wanted to leave The Clash as they were. Joe would certainly have had opinions about 2020. I'll be raising a glass to him tonight.

This is an early version/ drum machine demo of the song that became Burnin' Streets on his last album Streetcore, which was completed by The Mescaleros after his death. RIP Joe Strummer.

I've listened to The Avalanches a few times now and I think it's excellent. I'm normally put off by such a large lists of guests (I've got excited about too many guest heavy hip hop albums, only to be bored into disappointment) The Avalanches did it well on Wildflower and havemadeit work on this album as well. I wish this and a few other late in the year releases had come our earlier for Summer listening.

The Avalanches have passed me by somewhat but this is great and I clearly need to investigate further.
Here's to Joe.

Thanks for the heads up, Adam. Mick Jones did great things with Tony James in Carbon Silicon, but is very choosy these days who he works with, and when.

I love this bit of footage of Mick and Joe playing live together for the first time in 20 years just days before Strummer died.

Yep, lovely footage John. And yes, agree some of Carbon Silicon's stuff was ace. I saw them play up here at Night and Day, a small bar venue on Oldham Street. It was rammed and very very hot. Great little gig.

The Avalanches latest is quite a lot to digest, but it is worth the effort. Music Makes Me High is the real highlight on the album for me. Other star turns are We WIll Always Love You Feat. Blood Orange, Reflecting Light Feat. Sananda Maitreya (Terrence Trend D'Arby for those who lost track) We Go On Feat. Mick Jones and Interstellar Love Feat. Leon Bridges.

3 albums and 64 songs. You can forgive them it taking 20 years to release them because they are so full of music.