Today, April the 6th, is Lord Sabre Day, Andrew Weatherall's birthday- and today he turns 50. The top picture shows him djing in the early 90s. I'm fairly certain it was taken at Cream during the Sabres Of Paradise tour (note gear borrowed off Sandals). 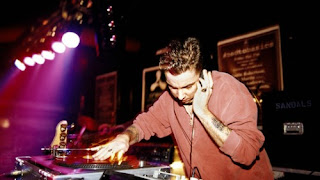 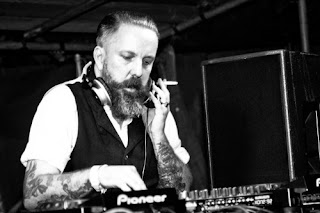 Having followed him since his earliest vinyl adventures, I've spent a fair amount of time over the last twenty odd years tracking down, buying, listening to, and more recently surfing for, his music. I think he's one of British music's genuine mavericks, always interesting, always on the move and always worth listening to- on wax and in print. Always looking forward but with the past in view. His remixes from the last few years are among the very best stuff he's done and The Asphodells album is a contender for album of the year so far. This is a bumper selection of  fairly randomly chosen Weatherall tracks from my hard drive to celebrate his half century...

Any brief internet/magazine biography always links Weatherall and Screamadelica. When the Scream put their collective boot on the monitor and released Give Out But Don't Give Up many felt that it was a backwards step. It was. But proving you can make a dub purse out a sow's ear, Weatherall reworked their Stonesisms into a heady twelve minute dub excursion that goes a little Screamadelica-esque in the final few minutes of this Sabres remix of Jailbird.

Similarly you get all the references to the artists he remixed in the early 90s. This one took that main keyboard refrain from James' second best known song and sent a thousand indie kids sprawling across the dancefloor. Confusingly there are two different names for this remix but they are I think the same mix.

Lino Squares was one of many aliases and pseudonyms Weatherall used during the late 90s, outside Two Lone Swordsmen. As Lino Squares he put out a six track vinyl pack of minimal, electro-oriented  music. These days it's more linocuts than Lino Squares.

The first piece of vinyl to bear the Weatherall name as a solo artist was an e.p. entitled The Bullet Catcher's Apprentice- the lead track Feathers was sold to sell cars, the Ford Tipp-Ex according to Weatherall. This song featured vocals from Weatherall and lists many things that are possible- but how one should never make disco without a Stratocaster.

You Can't Do Disco Without A Strat

And he followed it with a wonderful solo album- A Pox On the Pioneers- a couple of years ago, drawing on glam, rockabilly, and post-punk. This was a dub of Fail We May, Sail We Must (from the Japanese version of the lp).

Fail We May, Dub We Must

Two years ago he remixed Clock Opera. I'm not sure I know much about Clock opera but remember reading a so-so review of their album. In fact I'm not even sure I've listened to the original track despite owning the 12". But the Weatherall remix is a gem, one of many remix gems from recent times. This is a superb piece of electronic music, crisp beats, lovely synths and a fantastic repeated bit where everything goes all wonky.

Once And For All (Weatherall Remix)

In the last few years there have been a shedful of podcasts and mixes on the internet. This one, for Fact Magazine, remains one of the best, joining the dots over the course of an hour between (amongst others) CircleSquare, Dum Dum Dum, Bert Weedon, Wayne Walker, The Monks, Stockholm Monsters, Mogwai, Durutti Column, Dennis Wilson and The Mighty Wah! Proper stuff this.

Weatherall and Fairplay's Asphodells lp, Ruled By Passion, Destroyed By Lust, has been sent out to the remixers. This one sees their cover version of AR Kane's A Love From Outer Space get remixed by Mugwump- spaced out.


That should be enough to keep you going. I could have doubled the size of this post and still only scratched the surface. I don't what a luxuriantly bearded, Edwardian clothes-wearing, heavily tattooed, dancefloor and leftfield legend does for his 50th birthday but I for one will be raising a glass in his honour tonight, somewhere  in a caravan in north Yorkshire. Happy 50th birthday sir.

Well done SA. There is nothing more to say than raise your glass to his birthday.

One of your best posts ever sir.

Lovely, thank you for these!

(Reckon you'll have any Box bandwidth left by the end of the week though?!)

isn't it time for the ultimate weatherall list, with all his remixes and productions and those hard to find songs?

Mike- sadly I did begin working on a list a while back. But ran out of steam.