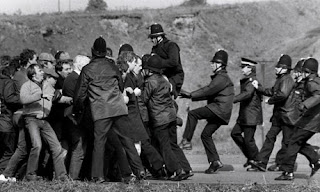 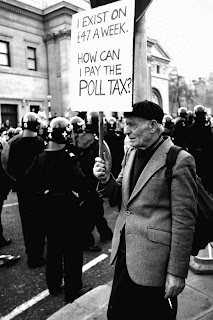 I suppose in some ways I should be grateful to Margaret Thatcher. It was during her time that I first took an interest in politics and the news, during the Falklands War (which as a 12 year old I wasn't too clear about the rights and wrongs of) and then especially during the Miner's Strike (which I was rapidly clear about the rights and wrongs of). I should be grateful that the repeated right wing attacks on any sub-group which wasn't 'one of us' (her words) led me to develop my own thinking and views- essentially that if I could define myself by being opposed to whatever she did. As time goes on you views may change and develop but my basic political education was formed during the 1980s and the Thatcher governments. When my parents moved us from Manchester to semi-rural Cheshire in early 1987 I was stunned to discover that there were people my age who were Tories, actual Tories, who thought Clause 28 was right, who believed that the market was the be all and end all (and lost money in the 1987 crash), who believed the poor should look after themselves, and who thought she was sent from heaven to save the country from the left. Again I should be grateful for this- arguing with people, taking positions, being put on the spot, was good, educational.

I should also be grateful that so much great art came out in the 80s, that defined itself against her and against the times she created- I don't need to list them, you know who they are. The bands and writers and artists who fought back, explicitly or implicitly, and created the sounds that formed the bedrock of my musical tastes (and so many other music bloggers, middle aged men and women that we are now) And there are plenty of sociologists who'll posit the theory that without Thatcherism we wouldn't have had the brightly coloured, futureshock of acid house- the way  Detroit's music was received over here and the cultural effects; can 20, 000 people standing in a field be a political act?

Her death was curious. I didn't feel the way I'd long thought I would. None of the fuss should be a surprise- the right wing press and figures shouldn't be too shocked to discover that there are people who didn't like her and who want to protest at her funeral. She divided the country into two, for and against, and often seemed to be in open warfare against the other half, those that weren't 'one of us'. That was how she did politics- if you are a conviction politican, you can't complain when half the country have convictions against you. The press coverage has been absurdly over the top and I suspect the only way to get through today is to go nowhere near a television set, pull the blinds down, put your fingers in your ears, ignore the pomp of this massively over-the-top funeral and hope that tomorrow morning, once she is in the cold, hard ground, it has all gone away.

This is A Certain Ratio from 1990, the year she lost office (and let's not forget, her own party removed her, suddenly and ruthlessly, when it looked like power was ebbing away).

Good piece SA. Glad to be stuck in a cupboard in Aberdeen today.

Great statement SA - presumably written from the bottom of the soul

Excellent post today! and a great track as well!