Down On My Knees In Suburbia, Down On Myself In Every Way 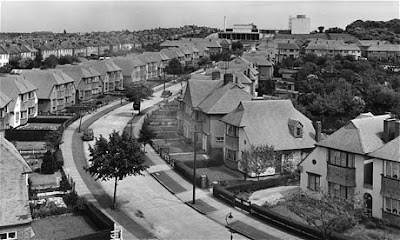 Ah- England's suburbs. One of those quintessential aspects of 20th century life- net curtains, garages, lawns and lamp posts, postmen and pillar boxes, commuters rushing for the train or bus, washing the car, walking the dog and boring, rainy Sunday afternoons. Alternatively celebrated as the heartbeat of England and the epitome of dreary conformity (and imagined as a hotbed of wife-swapping). Hanif Kureishi's book The Buddha Of Suburbia was televised by the BBC back in the early 90s and David Bowie provided an album length soundtrack of songs, with this title track- which sounds surprisingly good twenty years later. It has a little self-referential Ziggy riff towards the end as a knowing joke and nod of the head.

The Buddha Of Suburbia
Posted by Swiss Adam at 08:30

Terrifyingly wonderful picture you paint there Adam.
And the photograph too. The fact that it's in black and white is just perfect. Even the green bits are grey.
Lonely desolation. Where's the Society? Where's the Community? Fear not; Maggie's coming.
It's what we all aspired to, isn't it? A million miles (by No 37 bus) from inner-city slums and stig o the dump depravation.
Re-generation - cheek-by-jowl with the de-generation. New skylines. New Clear days. Emerging trees and emerging traffic. Castles caled 'home'. Hey neighbour .. Let's compare our hardy annuals.
'Nice car Jeff'. "Mmm. She's a beaut isn't she".
'Nice wife Trever'. "Mmm. You can covet her if you like".
Cats n dogs. Satchels and paperboys. Weddings and funerals. Hope and despair.
Watch your mortgage ebb away .. Just like your life.

Bowie's soundtrack is probably his most overlooked release. I always thought that it must have been working on this album that reinvigorated him and led him back to a path of musical exploration throughout the 90's and 00's. Where Black Tie White Noise sounded a bit forced and searching for the spark of 10 yrs earlier, TBOS sounds natural and relaxed (relatively speaking).
Buddha is very cohesive and engaging. I can't say I am a huge fan of the Outside and Earthling albums, although Outside is worthy of much conversation and argument. Earthling just felt like a mis-step.