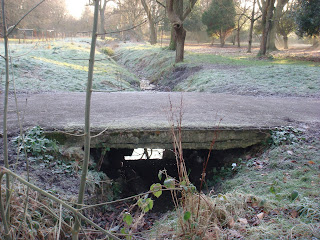 In our early-teenage years we used to spend a lot of time in Fog Lane Park. Fog Lane Park is a large municipal park- to the north it borders Burnage, to the West Withington and to the south Didsbury. This ensured the park had a wide social mix. The fairly exclusive road Old Broadway ran into the park- Anthony H Wilson owned the last house, overlooking the park and Richard and Judy lived halfway up. Factory's HQ on Palatine Road was a ten minute walk away. Fog Lane Park had/has several tennis courts, swings, a multitude of football pitches, a pets corner and massive duck pond, and the area pictured above where a stream/open sewer ran through a  secluded tree-lined part. Fog Lane Park was also the home of the Fog Lane Casuals- tracksuit and Lois cords clad, wedge haircutted, breakdancing, football hooligans (followers of Man City- the relegation fodder City of the 80s rather than what they are now), who'd batter squirts like us as soon as look in our direction. Whether the FLC actually existed I'm now not sure, though their initials were evident in graffiti- maybe they were a mythical street gang designed to keep us on our toes and make us get home before it got dark.

FWP used to appear in the graffiti in the Western Suburbs (of Sydney) "bogan" town of my childhood. I was told it stood for "Funnel Web Productions".

Ark at you posh folk. Me man would let us go any further than Platt Lane.