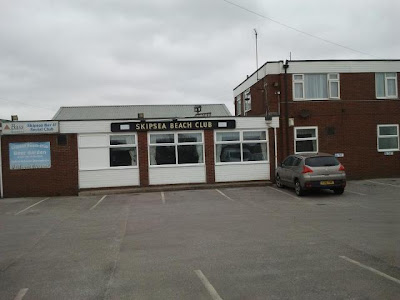 Don't all rush down to Skipsea Beach Club will you.

Mark Wynn, who I previously featured here, has another new album out (well, half an album), partly concerned with the fear of social situations and that's something we can all relate to isn't it? After my last post Mark sent me a cd and a handwritten, photocopied A5 booklet that came with it. I enjoyed the booklet as much as the album- more bands should make this kind of effort rather than just put who played what and thanks to Mum/lawyers/God. Mark has a way with words, funny and caustic and a little surrealistic and also tries to cram as many of them into his songs as he can. Possibly because the songs are so short, often under two minutes, and jam packed with rapidly strummed, punky, acoustic guitars.


I don't like to just copy and paste press releases but I think this one is worth it...

Desert Mine Music will start 2013 with its debut vinyl release. The release will be an album split between The Sorry Kisses and Mark Wynn, and will be entitled 'Social Situations'. Both of each artist's sides of the album will be available separately as digital downloads.

The Sorry Kisses' contribution is their fourth release on Desert Mine Music, following 2011's 'Keep Smiling', and features their trademark fuzz-wrapped guitars, double-tracked vocals and, this time, a more relaxed Lemonheads-esque sound. The core duo of Hayley Hutchinson and Sam Forrest recorded the songs in their own home studio, the Factory Of Unprofessional Sound, in November 2012.

Mark Wynn is a recent addition to the Desert Mine roster, and 2012 saw him release no less than four albums in this time. His side of 'Social Situations' features twelve songs packed in under twenty minutes, and illustrates Wynn's knack of blending despair, humour and kitchen-sink realism in a new-found lo-fi acoustic punk setting.

The project came together after a chance meeting on Hallowe'en 2012 in their shared hometown of York, when both parties realised their fear of social situations and decided to pour their combined insecurities into creating this limited edition vinyl release on Desert Mine Music.

It comes out on Record Store Day (this coming Saturday).

This is Tooth Decay from an album called It Hasn't Got A Title Yet But When I Think Of One I'll Let You Know.