B Is For Black Affair 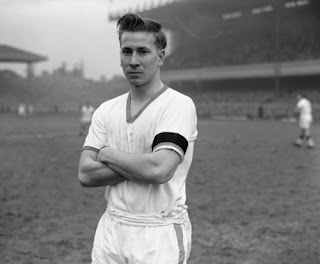 Steve Mason's 2009 side project Black Affair was an 80s electro inspired job, which was great in small doses but wore a bit over the course of an entire lp. Still, in a field of his own is Steve Mason- most people wouldn't record let alone release an album like this, so far removed from what he's known for. This was one of the highlights.

In a slightly belated tribute to United's 20th league title our picture shows Bobby Charlton, presumably in the aftermath of the Munich air disaster or an early anniversary of, with a cracking quiff. Bobby was present as a player for United's 4th, 5th, 6th and 7th league titles and he's still there, although he doesn't make the netting bulge anymore. The Premier League is a million miles from this picture. Yesterday's post-Beta Band group The Aliens had a song called Bobby's Song which I should've posted instead really.
Posted by Swiss Adam at 08:00