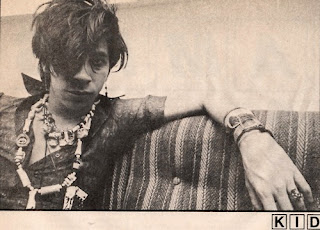 Kid Congo Powers, one of the coolest men in surf, rockabilly, doo-wop, voodoo garage rock, has been touring recently. Frustratingly he played Manchester the same night we had tickets to see Johnny Marr. The former Cramp, Gun Clubber and Bad Seed is somewhere in Europe at the moment and the gig reviews have been top notch. This was a single a month or two back- very swampy.

Kid Congo and his Pink Monkey Birds have a new album out at the end of May (which is already looking like an expensive month for records). This was the title track off their last album Gorilla Rose (which I really liked but not as much as the previous album Dracula Boots which I loved).

Dracula boots was better, missed him in berlin, look forward to the new LP