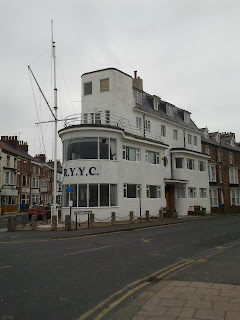 Alright?
I got back from North Yorkshire a few hours ago- 5 minutes back in Manchester and it started raining. The photo above is of the Royal Yorkshire Yacht Club in Bridlington. Brid was great- the old town bit up the top of the town was lovely and for a seaside town it isn't too tatty. The RYYC was formerly The Ozone Hotel and was the home for several months in the 1930s to Lawrence (TE Lawrence, of Arabian fame, not him out of Felt and Denim). Lawrence rejoined the RAF under an assumed name (Shaw) and spent some time testing speed boats in and around Bridlington Harbour. While I'm here a very nice woman has opened a vintage clothing shop including seafaring inspired clothes she makes herself- Wayside Flower. Nice second hand bookshop a few doors down as well. I liked Bridlington. If you're really lucky you might get some more of my holiday snaps.

Anything happen while I was away? Oh yes, Thatcher died. I can't say I was sorry but the death party stuff seemed a bit, well, distasteful. Her government was a blight on us, many of us, and I loathed her and her policies but I'm not sure about the celebrations. The press have gone way over the top the other way and the funeral's a fucking joke (and an expensive one at that). I'm guessing Elvis Costello's Tramp The Dirt Down and Pete Wylie's The Day Margaret Thatcher Died have been doing the internet rounds. Internet signal, Wifi, 3G etc was very poor, I really don't know how people up there cope. I mean, I could hardly get on Twitter all week. Sheesh.

Re: Bandwidth - my bumper Weatherall birthday post has used up all my monthly Boxnet bandwidth before the middle of April (like spending all your monthly wage by the same date- done that too). Readers last month reported some problems using Mediafire so I'm going to revert to 4Shared I think. Let me know how it works out. I (legally) downloaded Edwin Collins new album Understated before we went away and spent sometime listening to it in the caravan. I like it, and you should too. Try this one, then go and buy it.

Forsooth
Posted by Swiss Adam at 19:36

Is it just me that wishes it was 'Lawrence rejoined the RAF under an assumed name (Susan)' ? Probably.

Welcome home and that.

He was a bit conflicted about sexuality & all that.

good to have yez back

Glad you enjoyed your stay in Bridlington. On my hols I bought a cd by a Portuguese accordion player, about his electric car. The other 50% of the household was not as impressed as I was But we were both impressed at glasses of wine for 60 cents, and a bottle of beer for 75.

You did well to remain as enthusiastic and passionate as you did there, old boy.
'Lawrence of Brid' never made it beyond the story board ... Overdosed on scampi in the Captain's Table, having cheered Chas n Dave at the Spa Theatre, our hero got shat on by the chip-stealing gulls.

Dickie- whatever I write you top it.
George- the Portuguese stuff sounds ace

Did you check out the standing stone at Rudston? Tallest megalith in Europe (I think, maybe).

Sorry, I'm all for the street parties - a necessary corrective to the state funeral and the BBC being hounded into refusing to play Ding Dong The Witch Is Dead.

Aaaargh. I said to the missus on the journey up that I'd forgotten to check the prehisroric sites of the area. So no, didn't see standing stone at Rudston.