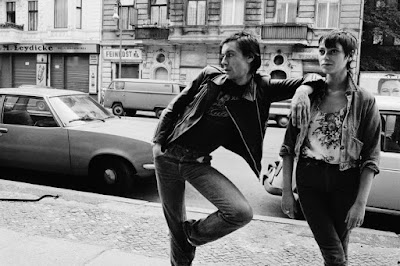 Iggy Pop's The Idiot is a remarkable album. Released in March 1977 (and followed in the same year by Lust For Life) it is the first of the Bowie Berlin albums. All the songs on The Idiot are co-written by David Bowie and his fingerprints- words, tone, chords, structures- are all over it. The Idiot was Iggy's first solo album and doesn't really sound too like the rest of his work. No cartoon stagediving here, no songs chasing the sound of two chord Stooges. The Idiot sounds thought out, a piece of work. It is also sounds dislocated- Iggy and Bowie loose and lost in West Berlin. On most of the songs- just listen to Nightcubbing- the beat is always a bit behind where you expect it to be, a fraction deliberately late.

Opening track Sister Midnight is a blast. Played live by Bowie throughout his Station To Station tour, it's a powerful opener, a punch. Bowie's guitarist Carlos Alomar plays on it. Many of Bowie's songs from Chateau d'Herouville and Hansa Studio have a certain funkiness and a lightness. Sister Midnight has Alomar's wonderful guitar sound and playing but is murkier, with the synths and rhythm keeping it more earthbound. Three note bassline. Iggy in a hole looking out- 'what can I do about my dreams?' he sings at one point after a verse re-working Oedipus.

His voice is the human touch on an album inspired by the men-machines Kraftwerk, an album with a European heart moving away the blues base of the music of the 1960s and early 70s, written and played by men trying to kick different drugs. Sister Midnight re-appeared with new words as Red Money on Bowie's Lodger album in 1979, the album generally considered to be the final part of the Berlin series, completing the circle nicely.
Posted by Swiss Adam at 08:00

Fantastic selection.
Iggy's new LP is a genuine attempt to recapture the sound of his 'Idiot' period and might well end up as one of my favourite albums of 2016. If you'd have told me that was even a possibility up to a few weeks ago, I would've probably laughed in your face.

I've been playing Gardenia and Break Into Your Heart a lot recently and am really looking forward to the new album.
Swiss Adam

Another in a long list of albums that illustrate what a great year '77 was for music.

Thank you for including The Idiot as part of the Berlin Period Bowie albums - because THAT'S EXACTLY WHAT IT IS! Writing for/with Iggy helped to re-engage Bowie and gave him some much needed self confidence after the darkness (dark beauty) of Stationtostation.
I'm not as much of a fan of Lust For Life - which most Iggy fans seem to prefer, but The Idiot and it's strange, insular night crawling world.

I agree to Echorich. Lust for Life is very popular to all of the rest but the better songs were on The Idiot. It was THE collaboration of Bowie/Pop that will stand the test of time. As Swede said I listened to this records a few times after Mr. Bowie died and have to say that this record is awesome.

Lust for Life is the smiling flipside of The Idiot.