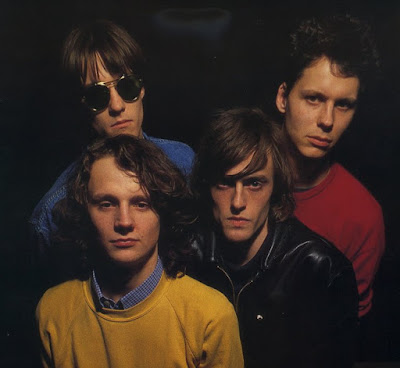 Last week the excellent One Song A Day series at the When You Can't Remember Anything At All blog presented a song from Spacemen 3's Recurring album. Big City (Everybody I Know Can Be Found Here) is a ten minute pulse, drifting beautifully with Pete Kember's hazy drawl. The album was released after the group broke up with Pete (Sonic Boom) getting his songs on side 1 and Jason Pierce taking side 2, with a bunch of songs that point his way to Spiritualized. It's not a competition but right now Sonic Boom's songs are the ones that are doing it for me more.

Actually it probably is/was a competition.

I think it was a bit of a bitter competition at that. I lost my vinyl copy of this album years ago which is a scab that has never healed as it is nigh on possible to replace for under 50 quid. It's a good album but not quite that good. Just To See You Smile is the one that does it for me every time. The remix of I Love You from the DJ Tones 12" is very good too.

Thanks for the plug...
It was definitely a competition between sonic and spaceman. Although Sonics side was better I think Spaceman won the war.
Swc

I was convinced I had this on vinyl too- and can't find it. Its not on the usual legal download sites. Might have to get a cd copy.

SWC- you've summed the Jason/Sonic campaign up there.