Don't Get Stuck In The Past 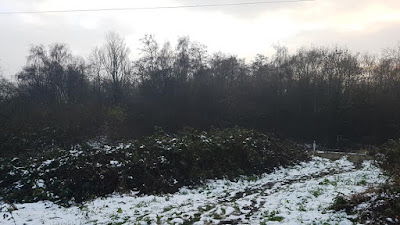 Back in the lockdown again. Too late (again), blame the variant rather than accept you've made mistakes. More U- turns, schools closed to most children less than twenty four hours after the Prime Minister assuring us schools are safe. The price now has to be paid for all those Christmas shopping trips and parties. Grim. The whole thing is grim.

Fontaines D.C., a five piece post- punk sounding band of young men from Dublin with an undeniably poetic take on lyric writing have been hailed by some people as the saviours of rock 'n' roll. I'm not sure that's true- but then I'm not sure anyone is ever going to be 'the saviours of rock 'n' roll' again. That whole shebang seems so last century don't you think? I haven't heard all of their songs from either of their albums but I did hear this one last year and loved it.

You could be reductionist and say they've just slowed the riff to Last Nite by The Strokes down (which in turn was the riff to Tom Petty's American Girl) but that sort of thing doesn't really matter. The riff is done well, the drums thump, the production is grainy and close up and the vocals are attention grabbing and dramatic. I'm also a sucker for songs which aim to give advice. After telling us several times over that riff that 'life ain't always empty' Grian Chatten offers the following-

Sink as far down as you can be pulled upHappiness really ain't all about luckLet your demeanor be your deep down selfAnd don't sacrifice your life for your healthWhen you speak, speak sincereAnd believe me friend, everyone will hear'

Nicely specific and homely wisdom for a man barely out of his teens. Chatten says they are 'a list of rules for the self'.

Completely different in tone and presentation but offering more advice for the listener is this from 1997, a song I wasn't much struck with at the time but which has grown on me over the years. Everyone's Free (To Wear Sunscreen) by Baz Luhrmann. In it's original form, an article by American columnist Mary Schmich, it acknowledges from the start that 'advice, like youth, probably just wasted on the young' but goes on to offer it anyway.

John Creedon plays them a fair bit on RTÉ - I love 'em. (They were going places until Covid's handbrake was so rudely applied.)
Sunscreen was something of a mantra at Medd Towers back in the day; still poignant. Dance!

I'm with you on the whole "saviours of rock n roll" thing, but I liked a few of these guys' songs. More from the first album than the second, but they still have time.

Not heard the first (or much of the second). Will have to get that corrected.

My favourite track is Liberty Belle. It's shouty yet poetic. Like The Pogues meets The Arctic Monkeys.

Fontaines D.C.'s A Televised Mind is the track that convinced me this year. This song is like the ghost of the late great Adrian Borland haunted the studio during recording. I was so struck by heights Televised Mind climbs the first time I head it I had to double check this was an original track. If it had bee released in say, 1983, it would have made end of year best of lists and Barney Hoskyns would have had a cover story and two page spread interview with the band.