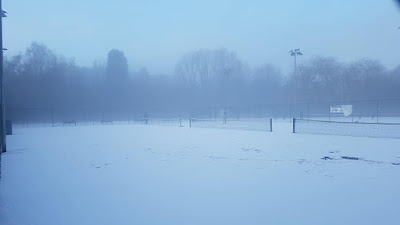 While searching for Islands by The xx for yesterday's post I found Islands by Seahawks, two minutes of gorgeous, ambient balm. It was the last track on their 2014 Paradise Freaks album, and could easily be three or four times as long but it's a lovely to way for the album to drift out on.

Another island- in 1989 Joe Strummer, dismayed and adrift after the break up of The Clash, recorded an album in Los Angeles with a band that became known as Latino Rockabilly War. Earthquake Weather is a couple of songs too long, the production and the mix are a mess in places, some of the playing is unsympathetic (some of Zander Schloss's guitar playing grates on me), Joe's voice is low in the mix- a lack of confidence in the material maybe- but there are some good songs hidden inside the album's grooves. Island Hopping is one of them, proof that Joe hadn't entirely lost his talent or his inspiration. A laid back, tropical tune with catgut guitar strings and percussion and Joe singing about escaping to a simpler life.

Every so often I give Earthquake Weather another go, but it's a record I've never been able to fully embrace. You picked my favourite tune from it.