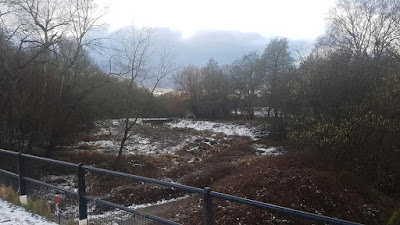 There's been a touch of c86 and mid 80s Scottish indie- pop in the breeze recently- two weeks ago Stevie at Charity Chic Music blogged about Edinburgh's The Motorcycle Boy and last week Brian at Linear Tracking Lives was writing about early Primal Scream (early Primal Scream, none of your Loaded Scream, not even your Ivy Ivy Ivy era Scream but All Fall Down Primal Scream). At the weekend Sky Arts showed Teenage Superstars,  a documentary about 'the golden age of Scottish indie', The Pastels, The Vaselines, BMX Bandits, The Jesus And Mary Chain and all he rest of it.

As an archetype  of this sound you can't go wrong with this 1986 single by The Shop Assistants. In fact, this song on 7" might be the best song of the entire scene.

Cavernous but lo fi drums, the low rumble of  bassline, cheap buzzsaw guitars, handclaps, sing song female vocals, deliberately borrowing from the Reid Brothers in style and by pinching a 'trip me up' line and everything smothered in reverb, it is wilfully and brilliantly amateurish. Safety Net sounds like it exists solely to take up the two minutes twenty three seconds it takes to revolve around your stereo at 45rpm before you flip the needle back to the start and play it again.

Sadly, it slipped out last year that Alex Taylor, singer of both The Shop Assistants and later The Motorcycle Boy, had passed away back in 2005. RIP Alex.

A completely glorious racket and a wonderful clip to go along with it. Such innocent times.

Ah, tour bus videos - don't ya just love 'em?
I was reminded of the Razorcuts listening to that but a bit more rough round the edges.

I recorded the Teenage Superstars doc, looking forward to watching it.
I saw the Jim Beattie incarnation of Primal Scream in the tiny and somewhat ramshackle Jolly Boatman pub near Hampton Court in 1987, just before the release of Sonic Flower Groove. A drunk girl got on stage, took her top off and danced with abandon, while a room full of bespectacled and anoraked indie kids looked on, appalled by such an outbreak of rockist behaviour. Take it from me, they clearly had something back then but on the strength of that show you would never have dreamed the band had albums like Screamadelica or Vanishing Point in them...

KIlls me that I can't watch Teenage Superstars in my region... I have gotten to see Big Gold Dream and The Glasgow School thanks to Vimeo at least...

Hey Echorich. I bought Big Gold Dream and Teenage Superstars on Amazon (to stream) a couple of years ago. Looks like only Big Gold Dream there now (on Prime even!), but keep an eye out. It is still listed (just unavailable), and these things come and go.

Thanks for the mention, Adam. Huge fan of Shop Assistants and The Motorcycle Boy. Safety Net is a stone-cold C86 classic.