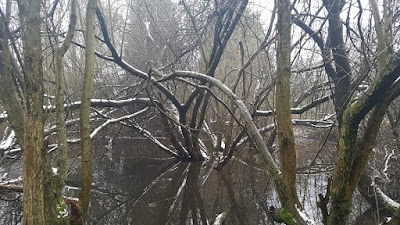 I have a long standing dislike of Pink Floyd, dating back to the 1980s. At university between 1988 and 1991 a friend convinced me to give the Syd Barrett stuff a go and I conceded some ground, but on the whole I was firmly against everything else. I'm not entirely sure of the reasons- in the 80s they seemed too wrapped up in the whole compact disc, old guard, polished, tasteful coffee table, guitar solo world. I have never taken to Dave Gilmour's voice- it grates on me like fingernails down a blackboard. A pub we used to frequent in Liverpool while at university used to play Money every night at closing time- ponderous, over the top, post- hippy nonsense. What else irritated me about them? The album titles like A Momentary Lapse Of Reason. The Wall. The Dark Side Of The Moon (and everything about it's 'classic' status). Middle aged men in tour t- shirts and bad leather jackets proclaiming the Floyd as 'real' music unlike [insert band name here] which was 'made by machines' or 'played by people who can't play'. It all seemed ridiculous to me and the antithesis of what was good/ real about music. People would tell me to try Atom Heart Mother or A Saucerful Of Secrets or Meddle, tell me they'd be right up my street, they'd fit in with my love of The Orb and similar.

I still have these prejudices deep inside me. But here's a Pink Floyd song (from after Syd Barrett left the group too).

An instrumental, experimental piece, very splashy cymbals and some wheezy organ, slowly building and atmospheric and then some driving drums, the sounds panning from left to right, some drones and piano and a guitar picking it's way in. Lovely late 60s inner space travel vibes.

In 1969 Pink Floyd were asked to provide the soundtrack to a film called More. Set in Ibiza, the story of a hitchhiker, parties, drug use and abuse, director Barbet Schroeder wanted the music to be integral tot he scenes, not just the backing music. This was the group's first album since Syd left and  they worked it out quickly, semi- improvising and recording live to a stopwatch to match the length of the film's scenes, no overdubs. I still struggle with Pink Floyd but this is one I'll happily listen to every night as the pub called last orders. If going to a pub ever happens again.

I'd totally agree about eighties and nineties Floyd, it's just corporate hospitality rock. But the stuff like Piper At The Gates of Dawn and Saucerful of Secrets are fantastic. Post Syd and it just isn't the same band really. I'm not as familiar with More, I must check it out.

I don't have much time for The Floyd either. It was the flying pigs that did it for me.

Meddle is a wonderful album.

I have time for the earliest Pink Floyd and I’m willing to give ground that the earliest work with David Glmour is sonically a leap forward for the band, but even before my Punk initiation, I was suspicious of Dark Side Of The Moon and Animals. The only Floyd song that I came to appreciate is Wish You Were Here and that has to do with a legend of Barrett visiting Abbey Road during the recording of the album and not recognizing him. He was never far from the band because he was still part of their DNA. But the 80s and 90s found Floyd just a bloated emotionless music machine that I found mor an affront than a bore.

I love Pink Floyd right up until the Final Cut.

I remember buying Dark Side of The Moon simply because EVERYBODY bought it and thought I should too. Couldn’t believe how boring it was

I share your anti-Floyd views. For me it's a late 70s thing and rejection of that old guard. Never felt it necessary to revise that prejudice.