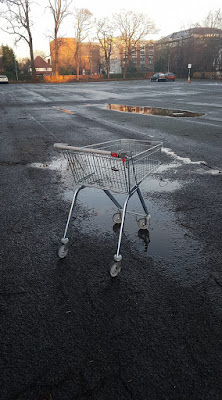 It's become one of those things you see on the internet, that since David Bowie died in January 2016 the world has gone to pieces, and while the two may be coincidental rather than related you can't help but feel some grand cosmic imbalance was created when David Jones breathed his last breath and that we've been sinking into the abyss ever since. The five years since 2016 seem to have passed very quickly too, events hurtling at us at a rapid speed, leaving us no time to get to grips with things before some other calamity strikes us. 'News had just come over/ five years left to cry in', the man himself wrote and sang in 1972.

In 2013 James Murphy, the LCD Soundsystem man I posted about last week, got his hands on one of the songs from Bowie's comeback album The Next Day. He cut and looped some clapping from a Steve Reich track, sampled the synth from Ashes To Ashes and created a monumental remix, minimal, sleek and modern. Bowie sounds superb too, back in touch and vital, 'your country's new... but your fear is as old as the world'. The full ten minute version is the one you want obviously, a long remix that you don't really want to come to an end.

This the edited version. It's worth mentioning that the 12" release was a beautiful artefact, white vinyl, die cut and embossed sleeve. The hole in the centre was square rather than circular.

The Next Day was trailed by Where Are We Now?, Bowie's nostalgic tribute to the years he spent in Berlin in the mid 1970s. He recorded it (and the whole album) in secret in autumn 2011 and released the single onto the internet without fanfare on his 66th birthday. 'Had to get the train from Potsdamer Platz/ You never knew that I could do that', he croons, a man looking back at his youth, 'just walking the dead'. Time passes, everyone ages, nothing stays the same. The Berlin of 1975 and the Berlin of 2011 are as different as a city could be. David Bowie of 2011 was not the same man he was in 1975. And though he and we didn't know it then, he had just five years left, almost exactly to the day.

As a young teenager i didn't get the whole Bowie 'men in tights' period. A few years later at a Penetration gig in '78 i heard this strange haunted synthesiser music coming through the PA before the band came on. I was told it was 'Warszawa' by David Bowie. I spent the next few years, as post punk inoculated me, going back through 'Heroes', 'Low' and 'Station' inside and out. The years passed but i never bought another Bowie record until this brilliant James Murphy remix. Don't get me wrong, i am a huge, 'certain kind of', Bowie fan. In fact any one of those records are worth more to me than the entire Beatles back catalogue. I also found his last will and testaments, 'Where are we now' and 'Blackstar' deeply moving and of course i learned that men can wear tights whenever they want.
-SRC

The moment those Ashes To Ashes keys come in my heart skips a beat.

Alright Adam.
I’d never heard even a decent Bowie remix until the DFA one. It’s perfection that only James Murphy could pull off. As a producer/remixer only Weatherall is on his level.

SRC- that is one of the most succinct and insightful appreciations of Bowie I've read.

On Bowie's birthday last week I took in the BBC documentary on the last five years of his life (we can see it here on HBO Max). I thought the style and presentation was interesting and well done. Bowie certainly was a man on a mission while working on Lazarus and Blackstar during his illness. Even with all of the access we get on film through the people that worked with him, he still remains such a mystery. I still grieve whenever I listen to any of his 21st century work. Pity as it does hinder my enjoyment of very worthwhile albums.

David Bowie's never far away, there's always something on the playlist and since Friday it's mainly been a bootleg of 'Scary Monsters' demos & outtakes. I really liked his latter albums though, particularly The Next Day and the DFA remix on the bonus CD remains one of James Murphy's best. Johnny's reference to Andrew Weatherall in his comment made me reflect that the death of no other musical artists has affected me as much as these two. Both typified that yearning drive for creativity and reinvention, and were pushing the boundaries on what was possible right to the end. Wonderful post, Swiss Adam.

When deciding to contribute to Monday’s Long Song this week, of course my intention was to find the most appropriate Bowie long song or remix I could get behind. The three top contenders, for me, were Station to Station, Love Is Lost -Hello Steve Reich Mix and the one I chose, Sue (Or In A Season Of Crime) which is the one I chose. the James Murphy mix of Love Is Lost is the best thing I think Murphy has ever put his touch to. I came so very close to choosing it.

Thanks Adam, Its always a pleasure reading your blog and occasionally sharing a comment. Echorich is right 'Sue or a season of crime' (long version) is superb. stunning brass and kinetic percussion, much better than the LP version. Who is 'Sue'?
-SRC